The President of City University of Hong Kong (CityU) delivered an in-depth talk at CCC Hoh Fuk Tong College in Tuen Mun on 19 May at the inauguration ceremony of the college’s Natural Science and Environmental Protection Trail in an effort to promote CityU among secondary school students. 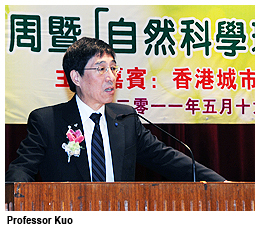 In his talk titled “Science and Disasters”, Professor Way Kuo said science and technology benefit humankind and promote social development. Today, as science and technology are thriving, it is hard to imagine life without the everyday convenience of new electronic appliances, the internet, and transportation, among others. “Safe and clean drinking water is a simple example. It alone has increased life expectancy by 10 years,” Professor Kuo said.

But scientific and technological discoveries and inventions carry with them inherent dangers. A recent example is the crisis at the Fukushima nuclear power plant following the earthquake and tsunami that left thousands dead, injured and homeless.

“But we should not blame science,” Professor Kuo said. “Nuclear electricity is essentially the peaceful utilisation of nuclear power, which should be seen as an unprecedented blessing for humankind.”

When questioned about the risks of nuclear power, Professor Kuo said very few scientific and technological devices are 100% safe. Hydro-power and solar power all carry risk, he said. However, we should maximise safety. “Our planet is not free from danger and death. It suffers earthquakes, tsunamis, floods, typhoons, hurricanes and volcanic eruptions. We have come to realise that anything is possible and that we should always be prepared for the worst-case scenario.” 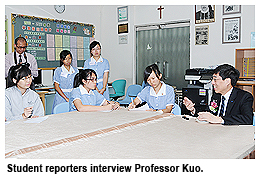