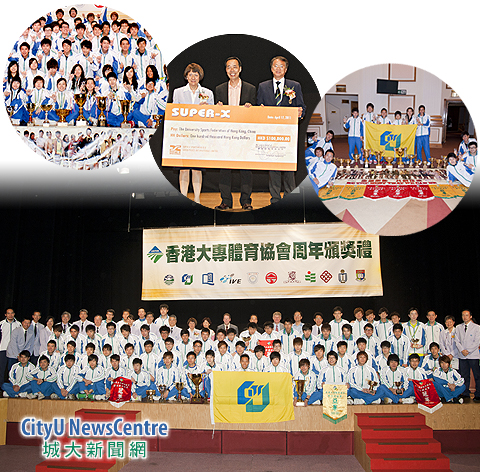 Yet again the title race went down to the wire. The last basketball matches of the season decided the overall 2011 results for the University Sports Federation of Hong Kong, China, and it was the City University of Hong Kong (CityU) teams that prevailed.

The basketball victories handed CityU its fourth consecutive grand slam—winning both the women's and men's annual overall champion titles—and its sixth in total. No other tertiary institution in Hong Kong comes close to such a record.

"One of the factors behind our success is we have a very strong support network among our student athletes, and this leads to enhanced sporting achievements ," said Mr Roy Ngai Hoi-yee, Senior PE Officer in Student Development Services.

The women’s team was already guaranteed their championship going into the last day of competition, but the men’s basketball team had to win their final game to ensure they won the basketball tournament as well as the overall men’s competition. In a memorable match, the CityU team held off a spirited challenge from PolyU.

The Annual Prize Presentation Ceremony organised by the University Sports Federation of Hong Kong, China was held on 17 April at the Jockey Club Auditorium, Polytechnic University of Hong Kong.