Law students win berth in US finals of mooting competition

Five highly accomplished law students from City University of Hong Kong (CityU) will represent Hong Kong in the international round of a prestigious moot court competition after defeating stiff opposition from equally talented teams from other universities in Hong Kong. 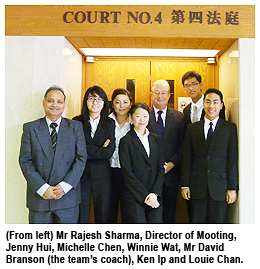 The CityU team—Louie Chan Ka-hang, Michelle Chen Zhaoxu, Jenny Hui Man-hei, Ken Ip Gee-kin and Winnie Wat Lai-yee—emerged triumphant after seeing off challenges from spirited teams from the University of Hong Kong and the Chinese University of Hong Kong in the regional round of the Philip C. Jessup International Law Moot Court Competition (Jessup Moot) held in the High Court building in Admiralty on 25 and 26 February.

The team will head to Washington, D.C., for the finals of the Jessup Moot after the panel of judges voted unanimously in favour of the CityU team.

The content of the mooting debate reflected two high-profile contemporary issues related to the use of missile strikes to combat terrorism and the freedom to practice one’s religion. The three judges, chaired by the Hon Mr Justice Kemal Bokhary, one of the three Permanent Judges of Hong Kong's Court of Final Appeal, scored both the written and oral arguments.

Named after a prominent judge from the International Court of Justice, the Jessup Moot is one of the most prestigious mooting competitions in the world. This year more than 600 teams from over 80 countries are participating, each hoping to secure a berth in the finals in Washington, D.C.

The students’ achievement shows that each member of the CityU Jessup Moot team was equally capable and each was an invaluable link.