A leading expert on atmospheric sciences at City University of Hong Kong (CityU) has been elected as Fellow of the American Meteorological Society (AMS), highlighting further international recognition for CityU academics.

Professor Johnny Chan Chung-leung, Chair Professor of Atmospheric Science and Dean of the School of Energy and Environment (SEE) at CityU, is the first scholar in Hong Kong, and only the second in the entire Greater China area, to earn this highly prestigious honour. 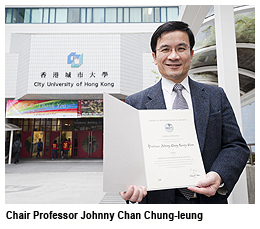 The award is recognition of Professor Chan’s outstanding contributions to atmospheric or related oceanic or hydrologic sciences, or their applications, during a substantial period of years. Only an elite group of the 14,000-strong AMS body is ever nominated and elected to Fellow status.

“This is indeed recognition for my efforts in atmospheric research but this is more an honour for the University than for me,” said Professor Chan, an internationally acknowledged expert on tropical cyclones and the Director of the Guy Carpenter Asia-Pacific Climate Impact Centre. He also thanked the faculty and his former and current students for their support.

In his research, Professor Chan has established theoretical relationships between the motions of tropical cyclones and atmospheric flow fields, notably the linear and non-linear effects of their potential vorticity, or spin, and of the latitude variation of the Coriolis parameter, which refers to the rotation of the earth. Applications of this theory have led to significant improvements in predicting tropical cyclone behaviour.

He is also a leading authority on the variations of tropical cyclone activity in the western North Pacific Ocean. He was the first to demonstrate that such variations are related to the El Niño phenomenon and the stratospheric quasi-biennial oscillation. Based on his explanations of such variations, he has questioned the effect of global warming on tropical cyclones.

Recently, he has been working on the problem of global warming and typhoon activity relationships, as well as on tropical cyclone and monsoon climate. He has published over 140 international journal articles and given more than 200 invited talks and conference papers.

According to the Essential Science Indicators, he ranks top in the number of Science Citation Index-listed journal articles related to tropical cyclones, and was the ninth most cited author in this field during the 1996–2006 period.

Professor Chan is currently a member of both the Tropical Meteorology Research Working Group and the Expert Team on Climate Impacts on Tropical Cyclones of the World Meteorological Organisation. He also edits the International Journal of Climatology, Atmospheric and Oceanic Science Letters and Acta Meteorologica Sinica.

The American Meteorological Society was founded in 1919 by Charles Franklin Brooks of Blue Hill Observatory in Milton, Massachusetts. The Society aims to promote the development and dissemination of information and education on the atmospheric and related oceanic and hydrologic sciences and the advancement of their professional applications.