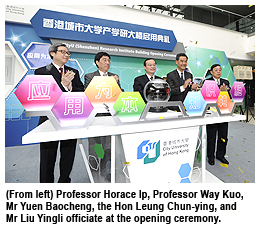 The City University of Hong Kong (Shenzhen) Research Institute Building (CityU SRIB) was officially opened at a ceremony on 20 January. CityU has invested over HK$100 million in the institute, which will be a permanent base for applied research, incubation and professional education on the mainland. It is also one of the capital projects aimed at developing CityU into a world-class institution.

Guests officiating at the ceremony included Mr Yuan Baocheng, Vice Mayor, Shenzhen Municipal Government, Mr Liu Yingli, Chairman of the Shenzhen side of the Steering Group on Shenzhen/Hong Kong Co-operation in Innovation and Technology, and from CityU, the Hon Leung Chun-ying, Council Chairman, Professor Way Kuo, President, and Professor Horace Ip Ho-shing, Acting Vice-President (Research and Technology). Mr Xu Qin, Mayor of Shenzhen Municipal Government who was unable to attend the ceremony due to his busy schedule, hosted a luncheon for Mr Leung, Professor Kuo and CityU’s senior representatives after the event.

In his address, Mr Leung expressed his gratitude to the leaders of the Shenzhen Special Administrative Region for their staunch support. He said CityU started to collaborate with the municipal government, tertiary education institutions and the industry in Shenzhen as recently as 10 years ago to develop applied research, promote joint education programmes and support entrepreneurial projects. 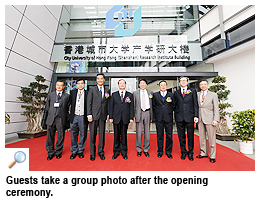 “The official opening of CityU SRIB today not only marks a milestone in CityU’s development, but also turns a new chapter of collaboration between Shenzhen and Hong Kong,” he said. “It signifies a new partnership between CityU and Shenzhen Municipal Government and between tertiary education institutions and industry in both cities.”

On behalf of the Shenzhen Municipal Government, Mr Yuan congratulated CityU on the opening of CityU SRIB. “We hope that CityU SRIB will contribute to the exchange of technology, know-how, skills and expertise, and add vigour to Shenzhen’s technological innovation and internationalisation,” he said.

Professor Kuo said CityU SRIB can help the University achieve its education objectives and create a better environment for collaboration between higher education institutions and industries in Hong Kong and Shenzhen. The model for incubating new technology companies developed by CityU SRIB will help promote the advancement of technology and industry in both cities, he added.

“CityU and the mainland collaborate in many ways. For instance, we have signed a collaborative agreement with the National Judges College to offer a Doctor of Juridical Science programme for mainland judges, and we have set up the State Key Laboratory of Millimeter Waves,” Professor Kuo said. He cited lines from the Tang Dynasty poet Wang Zhihuan’s Upon the Tower of Stork to commemorate the opening and stress the deep collaboration between CityU and the mainland:
“Leaning on the mountains the setting sun glows;
Far into the oceans the Yellow River flows.
For a thousand miles’ vista to feast my eyes,
A-mounting the Tower, yet a floor up I rise.” 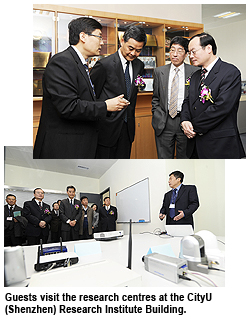 After the ceremony, officiating guests visited the research centres and other facilities in the building, commending CityU for its outstanding achievements in knowledge creation and transfer.

While CityU set up its first outpost in the Shenzhen Virtual University Park in 2000, CityU SRIB will make even greater contributions to China’s sustainable development. The institute is situated in Gaoxin District in Shenzhen and occupies a floor area of 12,500 square metres. In accordance with its development strategies and strengths, several research centres that promote economic and social development in Hong Kong and the Pearl River Delta region have been set up in the building. They are:

Biotechnology and Health Centre: The Centre aims to apply biochip and nanobiology technologies to the research and development of new medicines and clinical diagnosis tests for more effective examination and prevention of cancer and other diseases.

Information and Communication Technologies Centre: The Centre has established a laboratory in Shenzhen which is a branch of CityU’s State Key Laboratory of Millimeter Waves. Led by distinguished researchers in the field of wireless antenna from CityU and the mainland, the Centre is equipped with state-of-the-art facilities that include advanced laboratories and a powerful near-field antenna measurement system.

Future Networking Centre: The Centre has developed real-time controlling and monitoring technologies using WIFI and 3G VOIP systems on the AnyServer Gateway as the core research and development project. These technologies can direct applications of information technology to business and industrial sectors, exemplifying the achievement of detailed management and technology transfer by CityU Shenzhen Research Institute.

Futian-CityU Mangrove R&D Centre: Aimed at protecting and re-vitalising the growth of mangroves, the Centre concentrates on evaluation of macro ecosystems, the evolution of patterns and mechanisms, sewage treatment and purification functions of mangroves, remedial technology for damaged wetland, prevention of external pollutants and safety management.

Centre for Prognostics and System Health Management: The Centre is engaged in projecting the reliability of electronic components and systems through the evaluation of products to determine the advent of failure and mitigate system risk.