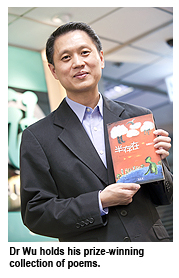 He is a poet, a fiction writer, an expert on modern and contemporary Chinese literature working at City University of Hong Kong (CityU) and now the recipient of a major literary award in the region.

Dr Gabriel Wu Yeow-chong, Assistant Professor in the Department of Chinese, Translation and Linguistics, won the Singapore Literature Prize in the Chinese language category for his collection of poems titled Ban Cun Zai (A Half-Existence).

The award-winning collection, his fourth volume of published poetry, was inspired by the film The Double Life of Veronique directed by Krzysztof Kieslowski. The film suggests that individuals are not complete entities but rather that they live only half a life while their other half exists elsewhere in another reality. 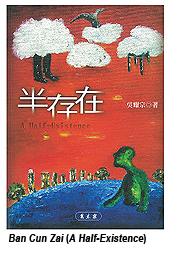 Dr Wu said he saw the movie at about the time he turned 40, about six years ago.

“The film forced me to confront the meaning of life and my own existence,” he said. “It made me think that perhaps we share our lives; that we only exist in relation to another, in the same way that logic and absurdity, for instance, are defined by the existence of the other.”

A Half-Existence comprises poems written between 1995 and 2007. The Book Council of Singapore described the work as “intensely lyrical yet simultaneously calm in contemplating the shape and meaning of being”.

The Singapore Literature Prize is awarded by the National Book Development Council of Singapore. There are four language categories: Chinese, English, Malay and Tamil. Dr Wu was the joint winner in the Chinese category.