One of the world’s most influential sociologists and communication theorists visited City University of Hong Kong (CityU) to deliver a City University Distinguished Lecture on 3 December. 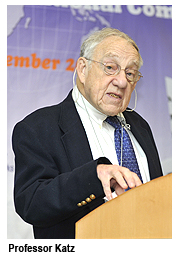 His talk was the keynote address at the start of a three-day conference organised by the Department of Media and Communication at CityU on internationalising “international communication”.

Reviewing his own decades-long career in researching and writing about media and communication, in what he wryly described as a “narcissistic safari”, Professor Katz shared with the audience of international scholars and students what he has learned, and speculated as to whether or not his immense body of work in the field of communications study could be framed within “international” communication.

In fact, he suggested, media messages served as “building blocks for the consolidation of nations” and, once established, these nation states did their best to interfere with the flow of communication across their borders. 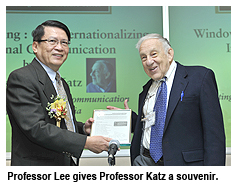 Other points raised included how theories related to the free flow of information, i.e. the internationalisation of international communication, could lead to the rise of global structures and the demise of the nation state, and, perhaps surprisingly, how ineffective the media are in effecting successful mass persuasion campaigns.

“Even though we hardly believe it ourselves, the truth is that propaganda and advertising don’t persuade very well, either domestically or, a fortiori, internationally,” Professor Katz said.

He ended his talk by suggesting that if the media have the power to empower, it might be because the mass diffusion of media in the form of television broadcasting and electronic communication platforms means that, to paraphrase, everyone knows everything, or at least something, about everything. 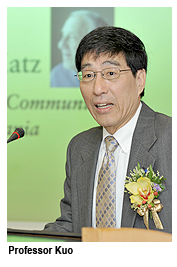 In his introductory remarks, Professor Way Kuo, CityU President, praised the Department of Media and Communication for putting together a conference of such international standing, and for successfully inviting an academic of the stature of Professor Katz to deliver the Distinguished Lecture.

Professor Gregory Lee, Dean of the College of Humanities and Social Sciences, remarked in his address that the presence of Professor Katz had a tremendous impact on student morale.

Professor Katz has worked in media and communication research for more than six decades. His early writings proved highly influential, with publications such as People’s Choice (1944) and Personal Influence (1955), a classic that has set the agenda for six decades of sustained research on media effects.

He has initiated research projects ranging from media effects, diffusion of innovations, secularisation of culture, political communication, uses and gratification of the media, media events and international diplomacy, comparative broadcasting systems, to intercultural interpretations of media texts. He was the first director of the Israeli Television, founded Hebrew University’s Communication Institute, and served as former director of the Institute of Applied Social Research in Israel. He is an elected member of the American Academy of Arts and Sciences.

For details of the conference, please visit: http://com.cityu.edu.hk/iic/