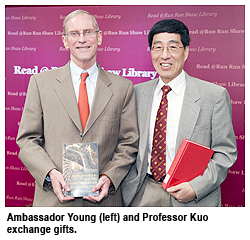 America’s top diplomat in Hong Kong gave a select group of local and international students at City University of Hong Kong (CityU) some timely advice during a visit on campus on 22 November.

Ambassador Stephen M Young, Consul General of the United States in Hong Kong, urged them to commit themselves to life-long learning and to follow their hearts.

“Don’t think learning ends at graduation,” said Ambassador Young, a 30-year veteran of the State Department and a fluent speaker of Mandarin and Russian. In today’s job market, young people need to be pro-active learners and prepared to be highly flexible about their career paths, he said.

“And don't just follow the money,” he said. “Do something you love and you will succeed. If you aren’t interested in your job, it’s hard to be successful.”

Ambassador Young, accompanied by Mr Joseph Bookbinder, Director of Public Affairs at the Consulate General, was visiting CityU to find out more about the University’s mission, tour its teaching and research facilities and engage in a roundtable discussion with students. 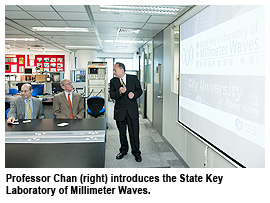 They discussed various challenges such as issues related to internationalisation and preparations for the new 4-year curriculum and the general education (GE) courses.

“Our new curriculum will integrate GE courses into the students’ overall degree to provide an in-depth professional education,” Professor Kuo said. He also talked about his desire to increase the opportunities for CityU students to gain learning, linguistic and cultural experience overseas during their studies.

Ambassador Young then visited the State Key Laboratory of Millimeter Waves where he was greeted by Professor Chan Chi-hou, Chair Professor of Electronic Engineering, who explained the background of the laboratory and its major projects. 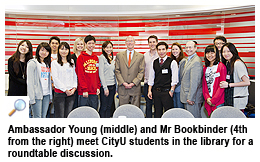 The meeting with the students, who were drawn from Australia, Hong Kong, mainland China, Pakistan, the US and Taiwan, took place in the University Library. The wide-ranging conversation touched upon the students’ backgrounds, their career and study plans and their learning experience at CityU. Broader issues explored included cultural identity, regional geopolitical issues and current affairs.

Ambassador Young said he was impressed by the students. “They are a very bright bunch of people,” he said. In turn, the students asked both representatives of the US government about how they started their careers as diplomats and their interest in China and the Chinese language.

Ambassador Young assumed his responsibilities as Consul General of the United States of America in Hong Kong in March 2010. He was US Ambassador to the Kyrgyz Republic from 2003 to 2005 and he also served in Beijing and Moscow.