Professor Way Kuo, President of City University of Hong Kong (CityU), shared his views on the differences in higher education between Greater China and Western countries with around 40 guests at the City Cultural Salon organised by CityU’s Cultural and Sports Committee on 28 September. 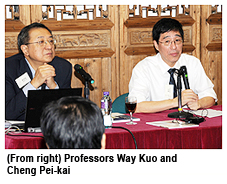 As the organiser of the activity, Professor Cheng Pei-kai, Director of the Chinese Civilisation Centre, member of the Cultural and Sports Committee, and convenor of the City Cultural Salon, thanked Professor Kuo for speaking at the first Salon of the new semester.

Professor Kuo started his talk by discussing the culture shock he experienced when he took up his first job in Asia as CityU’s President after working in America for more than 30 years. He then went on to talk about his many years experience in the higher education sector, comparing the situation of universities in Greater China with those in the West. By quoting comments from experts and academics, he said “institutions in Greater China lag behind their counterparts in Western countries by 20 years.” 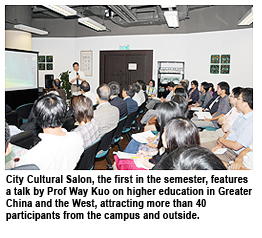 With the spirit of a scientist, Professor Kuo cited many examples to illustrate the deficiency of higher education in Greater China and then touched upon the reasons for the problems. Participants at the Salon were inspired by Professor Kuo’s talk, which was enriched with video clips, anecdotes and a Q&A session, too.

Professor Kuo pointed out there was a debate about academics performing both teaching and research in American universities several years ago. A consensus was reached and faculty members in US institutions now do both teaching and research. But this concept has not been fully accepted by professors in Greater China. Some still claim it is difficult to take on this dual role. 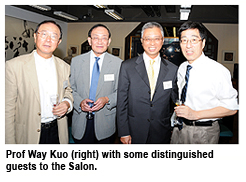 Professor Kuo then discussed higher education problems in Taiwan and the mainland, pointing out that the universities on both sides of the Strait can hardly perform their role due to the tremendous political influence on education. There are in fact professors in mainland China and Taiwan who concurrently hold positions in industry, government and universities. For example, former Taiwan president Mr Chen Shui-bian set up several new universities during his term of office out of interest for his political party. As a result, the quality of Taiwan’s universities has declined because money earmarked for funding higher education is now more diluted, Professor Kuo said.

Professor Kuo went on to discuss the surveys of university rankings published recently and suggested reasons for the uneven performances of universities in Greater China over the years. As there are various factors affecting the ranking, he suggested the results should be used for reference only. He believed that universities in Greater China can catch up with the top level in 20 years. However, he admitted that such a belief is a “vision” in a philosophical sense and that this idea can be taken as a “project” that sets out a plan with a road map of actions. 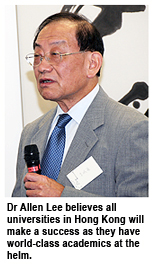 Following Professor Kuo’s talk, a number of guests joined in the discussion. Professor Cheng and Dr David Cheng Xing, CityU’s Associate Vice-President (Mainland and External Affairs), both brought up points about the sampling methodology used to calculate rankings. Dr Allen Lee Peng-fei, a prominent figure in Hong Kong business and political sectors, said he believes Hong Kong’s universities will become more successful as they are now under the leadership of distinguished scholars.

Before the Salon ended, Professor Cheng presented a souvenir to Professor Kuo and thanked him for his talk.

CityU Cultural Salon has been held regularly for the past 12 years. The objective is to promote cultural exchanges by inviting distinguished scholars and experts as speakers on different topics.

Man and Nature – Three stories with no definite messages