Professor Wan Gang, Vice Chairman of the Chinese People’s Political Consultative Conference and Minister of the Ministry of Science and Technology, led a 13-member delegation to City University of Hong Kong (CityU) on 28 April, to visit the University’s two state key laboratories and get an update on CityU’s teaching and research. 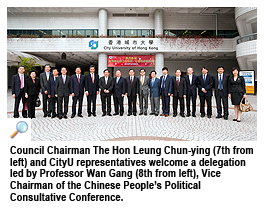 The delegation was warmly received by CityU representatives, including The Hon Leung Chun-ying, Council Chairman, Professor Chan Chi-hou, Acting Provost, Professor Roderick Wong Sue-cheun, Vice-President (Development and External Relations), Professor Paul Lam Kwan-sing, Vice-President (Student Affairs), Professor Edwin Pun Yue-bun, Acting Dean of the College of Science and Engineering, Professor Johnny Chan Chung-leung, Dean of the School of Energy and Environment, and other representatives of departments and units. In a meeting to welcome the delegation, Mr Leung thanked the Ministry of Science and Technology for visiting CityU several times to understand its latest research work, which indicates the Ministry’s high regard and strong support for CityU’s technology research. “To support Hong Kong’s role as a centre for developing talent, we must think out of the box and explore any new initiatives. Our next generation of graduates should not just be able to meet the local community’s demand, but to look beyond and gear up themselves for all of China and the world. That’s why CityU constantly puts equal emphasis on teaching and research,” said Mr Leung. 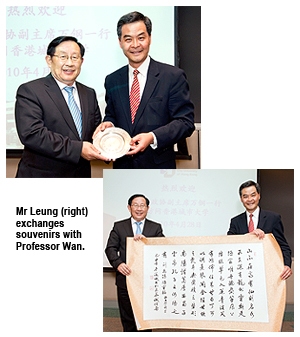 Professor Wan pointed out that a test of a city’s vision is whether it can provide opportunities to its young people, a test of the abilities of a university and its president is whether it can produce outstanding graduates, and a test of the competitiveness of graduates is whether they can achieve their future goals in a global environment. “It will be an economic structural problem if our society cannot provide sufficient employment opportunities to high calibre individuals,” he said.

The delegation first visited CityU’s newly established State Key Laboratory in Marine Pollution. Professor Lam, Director of the laboratory, Vice-President (Student Affairs) and Chair Professor of Biology, introduced the operation of the laboratory and presented some of its research projects to the delegation. The projects included developing medaka fish into a typical marine organism for the study of ecotoxicological and marine pollution issues, and using artificial mussels and semi-permeable membrane device technology to monitor the presence of metals and trace-level organic compounds in China’s coastline areas.

To meet the country’s pressing need for protection of its marine environment and biological resources as well as ecological safety, the laboratory will collaborate with marine experts from other local universities. High-quality marine environment research will be conducted on issues related to toxic chemical pollution, eutrophication, hypoxia, biological toxins and aquatic pathogenic bacteria along the coast of China. 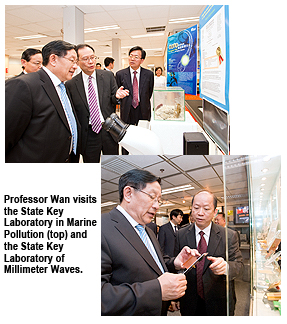 The delegation next visited the State Key Laboratory of Millimeter Waves. Professor Luk Kwai-man, Director of the laboratory and Head of the Department of Electronic Engineering, and Dr Xue Quan, Deputy Director of the laboratory and Associate Professor in the same department, introduced the facilities and research work of the laboratory and presented the research projects and inventions commissioned by different international organisations. They also outlined the latest collaborative project with China’s National Astronomical Observatories. After developing the antenna and amplifier for the Beidou 1 Satellite positioning system, the laboratory is now involved in the design of an antenna and radio frequency integrated circuit for China’s regional positioning system. The laboratory aims to apply the millimeter wave circuit design, antenna technology and computational electromagnetic in the development of a new communication technology for use in China.

Professor Wan highly commended the laboratory for nurturing talent for the state and encouraged the University to continue its research endeavours. He also invited the research team to join in the State’s research planning in the future.

After visiting CityU, the delegation met academics from other local institutions for an exchange of ideas.