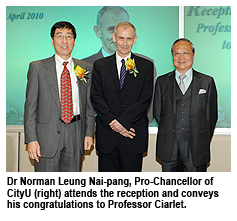 Chair Professor Philippe G Ciarlet from the Department of Mathematics at City University of Hong Kong (CityU) was honoured at a reception with the theme of “East meets West in mathematics” on 19 April for his election as a foreign member of the prestigious Chinese Academy of Sciences (CAS). This membership was bestowed upon him in recognition of his contribution to development and utilisation of mathematical tools to address and solve critical issues and problems in mechanics and modern engineering, as well as promoting mathematics in China.

Speaking at the reception, Professor Way Kuo, President of CityU, said, “As a mathematician, Professor Ciarlet is quite ahead of the curve.” Professor Ciarlet first visited China in 1982 and delivered lectures, organised and participated in conferences at Peking University, Tsinghua University and Fudan University. “He made tremendous impact to the community and demonstrated the concept of East meets West in and beyond mathematics,” Professor Kuo added.

Professor Jean Salençon, President of the French Academy of Sciences, expressed his gratitude towards Professor Ciarlet’s magnificent contribution to mathematical science, in his message sent on behalf of the Academy. Professor Salençon described Professor Ciarlet, his old friend for more than 15 years, as a wonderful teacher and an accomplished researcher. “Professor Ciarlet is always attentive to look for any signs of non-understanding from his audience, and that is the reason why his text books are so clear and easy to read,” said Professor Salençon.

Professor Pan Yonghua, Director-General of Education, Science and Technology Department of Liaison Office of the Central People’s Government in the HKSAR, conveyed his congratulations to Professor Ciarlet on being elected as a foreign member of CAS and also thanked him for his contribution in developing and utilising mathematical tools to solve critical issues in mechanics and modern engineering, and promoting mathematics in China. Professor Pan appreciated CityU’s active role in contributing to achievement of academic cooperation between the mainland and Hong Kong, especially in the construction of national key laboratories and nurturing of students. He expected that more Hong Kong scholars will participate in enhancing science and technology education in the mainland. 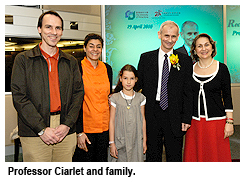 Professor Ciarlet was deeply moved by the honour bestowed upon him, and said he was “both honoured and feeling very warm to be surrounded by so many students, colleagues, friends, family and distinguished guests” during the reception held in his honour. Speaking on the main theme “East meets West,” he said, “Mathematics has considerably contributed to the establishment of long-term scientific cooperation because the links established between mathematicians are extended to academics from other disciplines.” To illustrate and explain, he said Hong Kong itself had been a remarkable link between the East and the West. “Mathematics is the parent of all sciences, including social sciences,” said Professor Ciarlet. 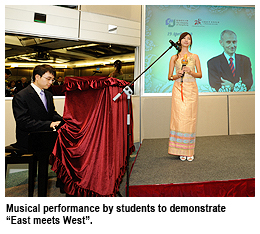 The reception was kicked off with a music performance by two students playing Hulusi, a Chinese musical instrument, and piano, a western musical instrument. Two students, one from the mainland and the other from Canada, compered the show. The musical items played were alluding to the honour bestowed on Professor Ciarlet, and the theme of “East meets West”.