The Centre for Chinese and Comparative Law (RCCL) of City University of Hong Kong (CityU) School of Law (SLW) hosted, in collaboration with the International Commission of Jurists (ICJ), a workshop entitled “Business, Human Rights and Access to Justice in China” on 5-6 March. 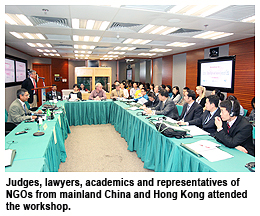 The workshop was attended by judges, lawyers, academics and representatives of NGOs from mainland China and Hong Kong. The two-day event examined various legal issues, such as available legal remedies for corporate human rights abuses, anti-discrimination litigation, protecting human rights of people with disabilities, judicial independence, the need for specialised environmental courts, lawyers’ autonomy, availability of legal aid, the role of trade unions and non-governmental organisations, and the scope of public interest litigation. Participants also discussed ways to overcome the obstacles that victims of corporate abuse face in mainland China. 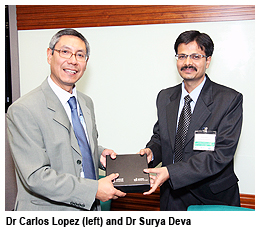 Explaining the background of the workshop, Dr Carlos Lopez, Senior Legal Advisor, ICJ, noted that, “The human rights responsibilities of businesses are an issue attracting lots of attention all over the world. Current work being done in the United Nations, led by Professor John Ruggie, is witness to that. The ICJ is conducting a series of country studies and workshops to gain a better understanding of obstacles that victims face in securing justice in cases of corporate human rights abuses. This workshop is, thus, part of a larger project aimed at setting a global agenda for legal and policy reform.”

In recent years, China has introduced new legislation to safeguard the human and labour rights of people (including workers) and minimise environmental pollution caused by economic activities. Despite continued improvement in the legal framework, there are still barriers for victims in availing legal remedies against companies. As the economy of China continues to grow, more legal reforms might be necessary to ensure that the business sector does not violate the rights of people in a socialist free market economy.

SLW and RCCL are playing a key role in China’s legal modernisation by offering legal training to Chinese judges and providing a platform to discuss legal reform options in a comparative perspective, said Professor Wang Guiguo, Dean of SLW of CityU. “This workshop is evidence of SLW’s continuous and constructive engagement with the Chinese legal fraternity to establish a rule of law society. We are very pleased that SLW has been able to make a useful contribution to this important project.”

After discussing background issues related to business and human rights and legal remedies in the first two sessions, the workshop focused on access to justice opportunities and challenges in the specific context of human rights abuses, labour rights violations, and environmental pollution. The workshop concluded with a session on reform options and recommendations.

Dr Surya Deva, Associate Professor and the coordinator of the workshop, who has prepared a detailed report for the ICJ on the theme of the workshop, noted that, “What China does or does not do matters to the world community. This holds true in the area of business and human rights as well. Considering that China is one of the largest economies, it is of utmost importance that companies operating in or from China fulfil their human and labour rights and environmental obligations.”