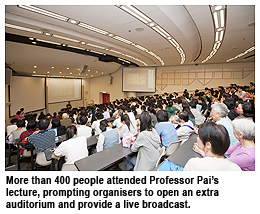 Renowned writer Professor Pai Hsien-yung hosted a Distinguished Scholar Lecture at City University of Hong Kong (CityU) on 2 March at the invitation of CityU’s Cultural & Sports Committee. In his lecture entitled “Chinese Cultural Renaissance: The new aesthetics of kunqu opera - from The Peony Pavilion (Youth Version) to New Jade Hairpin”, Professor Pai shared his insights into kunqu and the heritage of Chinese culture, and his efforts to revitalise and popularise the genre.

Known as the first “kunqu volunteer”, Professor Pai has devoted many years of painstaking work to have one of the oldest extant forms of Chinese opera more widely accepted by the general public.

Chinese culture seems to have been wandering for some time without a sure footing, said Professor Pai. “I believe it is a critical moment to rewrite Chinese culture,” he said. “The Chinese nation needs to rediscover its past, reevaluate its ancient heritage and learn to appreciate and love it dearly.”

“Many more cultural relics have been found and recently a movie on Confucius was launched with strong government support, seemingly signalling a return to China’s heritage,” he said.

Professor Pai likened the situation in China today to the Renaissance period in the West, a historical period during which the Europeans rediscovered the origins of their own culture and found sources of inspiration and enlightenment in ancient Greek and Roman heritage. 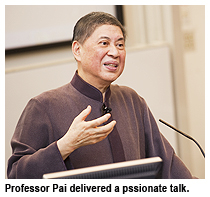 Yet a cultural renaissance requires hard work for a long, long time and a solid foundation is crucial, Professor Pai emphasised. Citing himself as an example, the “kunqu volunteer” told the audience that he chose to start a cultural crusade revitalising kunqu not only because he happened to love it as a child, but also because it used to be widely enjoyed by emperors and commoners alike in the Ming and Qing dynasties. With a history of six centuries, the genre has been dubbed the “Ancestor of All Theatres”.

Professor Pai is confident that, like ancient theatre-goers, audiences today will be won over by the twin essences of kunqu - beauty and passion. He is dedicated to introducing it onto campuses. “Without young fans, kunqu can’t be on the stage for long,” he said.

Chinese culture has been neglected within our education system, Professor Pai pointed out. “Since childhood, at school we have been taught to do still life paintings of apples or bananas, to sing songs accompanied by the piano, and to put on scenes from Shakespeare’s plays,” he recalled.

While conceding the merits of Western culture, China also has great art we can be proud of, such as Chinese painting and calligraphy and various theatrical genres.

Such a lopsided education has deprived us of opportunities to become familiar with China’s cultural heritage as young children. This has resulted in us looking upon our own culture as inferior and deterring us from learning about it.

When first attempting to popularise kunqu among students, Professor Pai was utterly unsure of himself, he admitted, but it turned out to be a great success across mainland China. 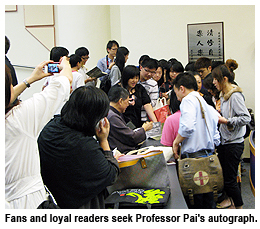 “We put on five shows of New Jade Hairpin at Peking University and more than 10,000 tickets were issued. At the University of Science and Technology of China in Hefei, we put on a performance of The Peony Pavilion (Youth Version), and the 1,500-seat theatre was packed with 3,500 science and engineering students, 95% of whom had never seen or heard of kunqu,” Professor Pai enthused.

“The young people were moved by the beauty and passion of kunqu. It evoked their sense of identification with their own heritage. A spiritual resonance was created, so to speak,” he said proudly.

Professor Pai now hopes primary and secondary pupils will become kunqu lovers too, embracing the art from an early age. In addition, Professor Pai has been trying to promote kunqu in other parts of the world. Since 2006, The Peony Pavilion (Youth Version) has been performed worldwide. On four University of California campuses, 12 performances were given, each attended by an appreciative full house.

The performances in the US were warmly received in academic circles and led to new courses in kunqu art being launched at the University of California at Berkeley and University of Michigan.

In 2008 The Peony Pavilion arrived in UK, home of William Shakespeare, and then in Greece, birthplace of Western theatre. It won enthusiastic praise on both occasions.

Over the past five years, Professor Pai and his kunqu troupe have performed in 30 universities across mainland China, Taiwan, Hong Kong and around the world.

Kunqu was proclaimed by UNESCO in 2001 as a Masterpiece of the Oral and Intangible Heritage of Humanity.

“Kunqu, I hope, will be brought to the world as a whole so that Western people, in particular, can come to understand, appreciate and respect Chinese culture,” said Professor Pai, proclaiming a mission with responsibilities on the long, long road ahead.

And the professor is beginning to sympathise with Confucius, he said jokingly, and beginning to understand how the ancient sage must have felt while, towing his luggage, he toured various states 2,500 years ago trying to promote his ideas.