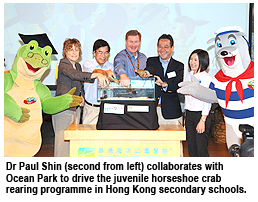 Under the supervision of CityU researchers, secondary school students participating in the programme will learn how to raise horseshoe crabs, record and monitor their growth and finally release them in the wild. The programme aims to bolster student interest in conservation and help preserve the endangered species.

Dr Paul Shin Kam-shing, Associate Professor at CityU’s Department of Biology and Chemistry, said, “The programme does not simply focus on rearing marine creatures but aims to let secondary school students have a hands-on experience to better understand marine ecology.”

The programme will run between October 2009 and September 2010. Each participating school will be responsible for rearing 50 juvenile horseshoe crabs for eight months, and release those meeting the required standard at designated fields in September 2010. CityU researchers will explain to participants the guidelines, provide technical support, observe the conditions of the crabs at schools through regular visits, and teach students how to preserve specimens from the old shells of crabs. The participating schools submit reports on a weekly basis, encourage students to rear the crabs and record details of their learning activities. Upon the successful completion of the programme, schools will receive a certificate in recognition of their participation. 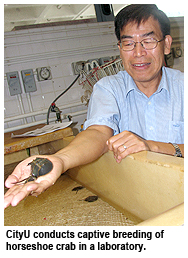 The scientific name of horseshoe crabs is Tachypleus tridentatus, and they have evolved for more than 400 million years. Their stature as a living fossil stems from the fact they have changed very little since their Paleozoic Era origins. In past decades, the coastal development and environmental pollution in Hong Kong have damaged the natural habitat of horseshoe crabs, resulting in a drop in their reproduction and survival rates.

CityU began its collaboration with Ocean Park Conservation Foundation on the research and conservation of horseshoe crabs in 2006, including the collection of scientific data on the natural habitat of horseshoe crabs in Hong Kong. To save their natural habitat and that of other endangered species from further deterioration, the two organisations have strived to have horseshoe crabs listed as an endangered species in Hong Kong and to promote awareness of protecting their environment. They released 20 captive-bred horseshoes in Shui Hau, Lantau Island, in September 2008. Electronic chips were inserted in these crabs to track their growth and movements.