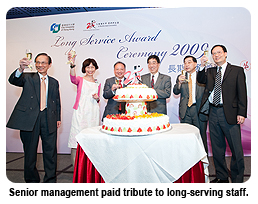 As a tribute to 355 dedicated staff members who have rendered 10 to 25 years of service to City University of Hong Kong (CityU), a Long Service Award ceremony was held on 20 October to acknowledge their loyalty and contribution to the University.

In his opening remarks, CityU President Professor Way Kuo expressed appreciation for the support of these colleagues over the years. “Long service represents an untiring commitment to CityU. Without your contributions, CityU would not have become what it is today,” said Professor Kuo.

This year, 62 staff members received the 25-year service award, 139 the 20-year award and the remaining staff were rewarded for 10 or 15 years of service at the ceremony, which was organised by the Human Resources Office. Professor Kuo and senior management representatives presented the awards to colleagues in the two longest-serving categories. Officiating at the ceremonial cake-cutting, senior management paid tribute to CityU’s silver jubilee anniversary with colleagues who have dedicated themselves to supporting the University’s development through the years. 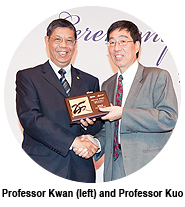 Professor Alex Kwan Yui-huen, Head of the Department of Applied Social Studies, has taught many young Hong Kong professionals during his 25 years at CityU. He took pride in the University’s achievements. “It makes me proud to see the presence of outstanding CityU graduates in every sector of society, and many of them have been my students.” 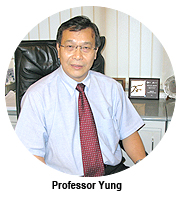 Engineering and Director of the Wireless Communications Research Centre, said CityU’s research work has influenced the industrial and commercial development of Hong Kong and the mainland. “In response to changes in Hong Kong’s economic infrastructure, CityU has been asserting a prominent position within the industry's advancement,” he said.

Mr Alex Ip Yum-fat, Technical Officer of the Computing Services Centre, also received the 25-year award. He worked in the Facilities Management Office and is now mainly responsible for upgrading the University’s IP telephone system. “As CityU improves its facilities in pace with the advancement of technology, I also continue to learn and add value for myself to make contributions to the University.” 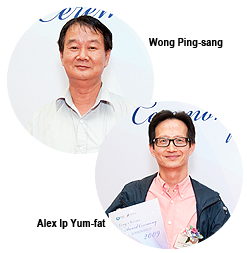 Having served the University for a quarter century, Mr Wong Ping-sang, Senior Driver with the Facilities Management Office, has provided transportation services for many prominent figures and world-renowned scholars. He said his frequent services to and from the airport in recent years for overseas scholars visiting CityU was strong evidence of the University’s internationalisation. “Our efficient and diligent colleagues help CityU in so many ways. The hard work of our colleagues has led to such international recognition of CityU,” he added.