City University of Hong Kong (CityU) School of Law will launch the Asia-Pacific Alternative Dispute Resolution (ADR) Moot in August 2010. It will be the first ADR Moot of its kind and will take place at CityU, Hong Kong. The competition provides a platform for law students to develop ADR research and analytical skills. 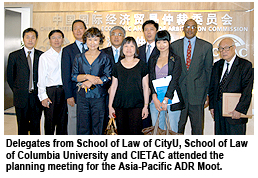 The competition will be jointly organised by CityU’s School of Law, the School of Law of Columbia University and China International Economic and Trade Arbitration Commission (CIETAC). They put together the delegates from the three institutions and signed a tripartite agreement in Beijing on 1 September, highlighting the level of commitment to this educational endeavour.

The competition involves both attorney/legal counsel and client in a number of scenarios. Teams will be judged on several criteria to reward the effective use of advocacy and problem-solving skills. It is expected that 20 teams from all around the world will take part, including a team from the US, South Korea, Singapore, Malaysia, Thailand, Taiwan, mainland China, Japan, India and Australia. 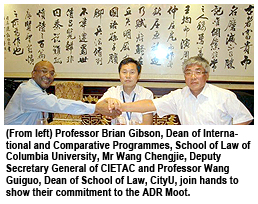 Professor George Bermann of the School of Law of Columbia University, the Hon Chief Justice Andrew Li Kwok-nang, Chief Justice of the Hong Kong Court of Final Appeal, Professor Michael Reisman of Yale University, and Justice Wan Exiang, Vice President of the Supreme People’s Court of the People’s Republic of China, have agreed to serve as Honorary Patrons of the competition.

The moot also provides valuable research and debate training for students and assists in their professional growth and self development. It offers law students a unique education experience and helps them familiarise with alternative dispute resolution practices in the Asian region.