“Amalgamation, consolidation and commercialisation may prove to be overkill for the publishing industry, resulting in the decline of a cultural enterprise boasting thousands of years of history,” declared Dr Chan Man-hung, the first 2009 City Cultural Salon speaker.

Dr Chan, Vice Chairman and President of Sino United Publishing (Holdings) Limited, is a renowned publishing veteran in the Greater China Region with more than 30 years of publishing management experience. On the evening of 24 September, Dr Chan, on the invitation of CityU’s Chinese Civilisation Centre, spoke about “Globalisation, the future of the publishing industry in China, and the role of Hong Kong”. He shared his views on trends within the publishing industry with more than 30 guests from local higher education institutes and cultural and publishing sectors. 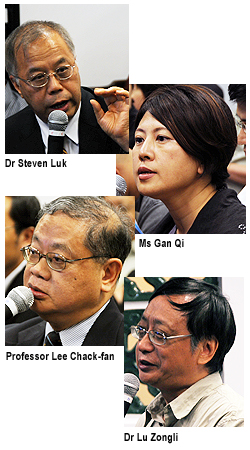 The industry in numbers

Citing statistics in his review of China’s publishing history, Dr Chan revealed the little-known fact that the Chinese publishing industry in recent centuries was in no way inferior to its western counterparts. In the 1930s, Commercial Press was already one of the four largest publishing houses in the world. In about 2,000 years between the Han and Qing dynasties, China had published more than 300,000 titles. By comparison, in just the first half of the 20th century, more than 100,000 titles were published. 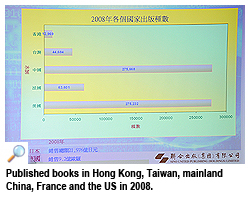 “The Chinese book markets in Taiwan, Hong Kong and the mainland have started to converge into one, and Chinese publishers are already working closely together,” said Dr Chan. “Also, the Chinese publishing industry now runs in parallel with its international counterparts, which can be seen from the frequent simultaneous publishing of both Chinese and English editions of the same title.”

The Chinese publishing industry is also largely influenced by its international counterparts. “There are more than 10,000 new titles translated from various languages each year,” said Dr Chan. “With more than 275,000 new titles published in 2008, China is already a prominent publishing nation, comparable to the US. However, despite such quantity, not too many Chinese books are of correspondingly high quality. China therefore remains a strong import nation at present and not yet a strong publishing country.”

Dr Chan said publishing is both a commercial and cultural activity. The focus should not only be on short-term profit but also on long-term interest generated by the publishing of more quality books. A real publisher, he said, should not be confined by popular trends and led by readers’ demand but rather, direct the market with forward-thinking.

Regarding the current trend towards amalgamation within the publishing industry, he expressed some reservations. Although amalgamation may prepare publishers to compete in the international arena, it could lead to consolidation and commercialisation. Ultimately, these same commercial factors could lead to a loss of uniqueness and eventual deterioration.

Hong Kong had been the Chinese book market leader for more than 10 years through the 1980s, but it is now facing a stern challenge in the Greater China Region. Dr Chan said Hong Kong’s publishing industry could survive if it utilised its unique strengths. 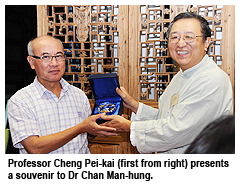 He indicated that Hong Kong’s publishing industry, in terms of market size, is no less than any other mainland city. In addition, Hong Kong is the most international and diverse city with a thriving bilingual environment. Modern technology advances have created a very good environment for the publishing of electronic books, and Hong Kong should be able to capitalise on its technological edge.

Although there are obstacles, Dr Chan said Hong Kong could ultimately overcome geographical boundaries and merge with the Pearl River Delta Region to become part of the much larger mainland market.

Dr Chan’s 90-minute talk prompted many questions about the correlation between education and publishing. Dr Lu discussed the phenomenon of “knowledge fragmentation” resulting from the dissemination of information through the internet and its impact on the publishing industry. Ms Gan said amalgamation, commercialisation and an emphasis on economies of scale could lead to a lack of variety.

Professor Cheng Pei-kai, Director of Chinese Civilisation Centre, cited the development of the centre over the past 12 yeas as an example to highlight that long-term development of the publishing industry could only be achieved through enthusiastic collaboration between the cultural, publishing and education sectors.