The School of Law (SLW) at City University of Hong Kong (CityU) hosted a public lecture entitled “Issues Concerning International Treaties Applicable to Hong Kong” on 22 September. The guest speaker was Mr Hu Zhiqiang, Director of the Department of Treaty and Law at the Commissioner’s Office of China’s Foreign Ministry in HKSAR. 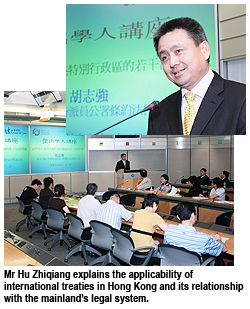 “The lecture series provides a public forum in which the University can interact with the wider community and examine legal issues,” said Professor Wang Guiguo, Dean of SLW. “This lecture helped participants better understand the implications of international treaties on our political and social development. It also widened our students’ views and could prove very useful in their future professional careers.” 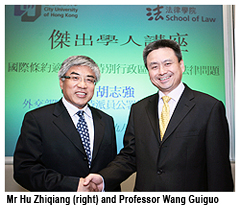