Six distinguished persons will be bestowed the title of Honorary Fellow of City University of Hong Kong (CityU) in recognition of their distinctive contribution to the development of, and service to, the University at the Honorary Fellowship Conferment Ceremony to be held tomorrow (23 September). They are Professor Chan Kei-biu, MH, Mr Chan Tai-ho, Mr Andrew Fan Ka-fai, Mr Peter Ho Ka-nam, Mr David Hui Yip-wing and Mr Gabriel Yu Chi-ming.

Dr Norman Leung Nai-pang, Mr Raymond Or Ching-fai and Professor Way Kuo, Pro-Chancellor, Deputy Chairman of the Council and President of the University respectively, will officiate at the ceremony. 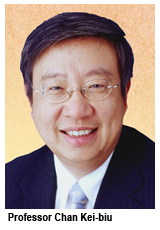 Professor Chan Kei-biu, Chairman and Senior Managing Director and founder of Surface Mount Technology (Holdings) Ltd, has provided valuable support to CityU. By filling eminent advisory positions with the College of Science and Engineering, he has enriched CityU’s educational activities with his extensive experience in the electronics sector. The University named a lecture theatre after him in 2004 and conferred the title of Distinguished Fellow upon him in 2006 in recognition of his staunch support. Professor Chan received a bachelor degree in Electrical Engineering, a doctoral degree and an honorary fellowship from University of London in 1968, 1972 and 1998, respectively. He also plays an active role in public service, including chairmanship of the Hong Kong Electronic Industries Association. In 2008, he was awarded the Medal of Honour by the Hong Kong SAR Government for his valuable contribution to the local electronics industry.

Mr Chan Tai-ho, founder and former Chairman of Playmates Holdings Ltd and Director of Dragon Lake Development Ltd, is an innovative entrepreneur and philanthropist who supports many worthy causes. He has made a great contribution to the development of CityU. The recent establishment of the Chan Tai Ho Education Fund to support scholarships and bursaries is a good example. In recognition of his unfailing support over the years, the University’s multi-purpose hall was named after Mr Chan in 2002. Mr Chan has extensive experience in public and social services in Hong Kong and mainland China. He is a member of the CPPCC Standing Committee of Jieyang, Guangdong Province, honorary member of the Hong Kong Chiu Chow Chamber of Commerce and honorary president of the Federation of Hong Kong Guangdong Community Organisations. 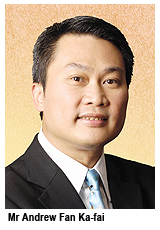 Mr Andrew Fan Ka-fai, President of the Greater China region for Nu Skin Enterprises, Inc., has extensive experience in direct selling. Being among the first bachelor degree students graduating from CityU, Mr Fan, who obtained a BBA (Hons) degree in Business Studies in 1988, has been devoted to serving his alma mater. He served on CityU’s Council in 2007 in the capacity of Chairman of the Provisional Standing Committee of the Convocation and was a member of the Council’s Community Relations Committee and Nominations Committee. He is also a generous donor who set up the Top Outstanding CityU Student Leader Awards and Academic Improvement Awards for Student Leaders. He is a tireless participant in public and charity services, serving as a Committee Member of ASEAN Children Heart Surgery Fund and Representing Member of Asia in the Association Advisory Council for the World Federation of Direct Selling Associations.

Mr Peter Ho Ka-nam, Managing Director of Techworld Industries Ltd, obtained CityU’s masters degree in Engineering Management in 2007. An outstanding entrepreneur and alumnus of CityU, Mr Ho has made significant contributions to the University and the manufacturing and engineering industries. He helped CityU establish close relationships with the business and industrial sectors by serving as Patron of the CityU Business and Industrial Club (CUBIC) and Chairman of CUBIC’s Consumer Electronic Group. He has also made several generous donations to the University in support of the Industrial Attachment Scheme, student scholarships and development of the Chow Yei Ching School of Graduate Studies. CityU’s Lecture Theatre 10 was named after him in November 2007 in appreciation of his contribution.

Mr David Hui Yip-wing, Director and Group General Manager of Chinachem Group, graduated from CityU with a masters degree in Chinese and Comparative Law in 2001. Over the past few years, Mr Hui has given a great deal of support to the University, particularly in alumni activities and boosting alumni support. He was a founding member, and is now an honorary member, of the CityU Alumni Giving Club, where he took the lead through financial and practical support upon its establishment in 2003. He has also served as Co-chairman of the Alumni Donations Committee since 2002. In appreciation of his generous contributions, CityU’s Practice Gymnasium 3 was named in October 2005 after the Winling Basketball Team, one of the Hong Kong Division A1 basketball teams established by Mr and Mrs Hui in 1980 for promising basketball players.

Mr Gabriel Yu Chi-ming, founder and Chairman of iTVentures Group of Companies and Italade Technology Holdings Ltd, is regarded as an IT pioneer in Hong Kong due to his founding of Chinesebooks.com and creation of the digital version of Siku Quanshu, the largest electronic database of Chinese classics. He graduated from The University of Hong Kong in 1970 and obtained his MBA from The Chinese University of Hong Kong in 1975. He has held a number of key government advisory positions, including membership of the Sub-Committee on IT in Education of the Education Commission, Information Infrastructure Advisory Committee and Chinese Language Interface Advisory Committee. He has offered enthusiastic support for CityU’s education and alumni activities. He is an adjunct professor and has been a member of the Court, the University’s supreme advisory body, since 2007.