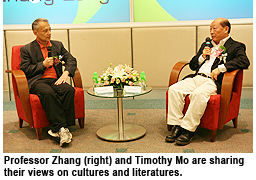 “This is a genuine dialogue; no agenda was set,” said Professor Zhang. In their dialogue, topics moved and crossed boundaries effortlessly. They discussed the differences and affinities between the East and the West, and shared their views on cultural hybridity, national identity and nationalism.

Christine Wang Nan, MPhil student of CTL, said the dialogue is like an encyclopaedia of cultures. “I learnt from them the objective way to look at our world, Chinese and Western cultures,” Christine said.

Timothy Mo was born in Hong Kong in 1950 and educated in Hong Kong and England. His novels have won many international literary prizes, including the Geoffrey Faber Memorial Prize, the Hawthornden Prize and the James Tait Black Memorial Prize (for fiction). And three of his novels were short-listed for the Booker Prize for Fiction, Britain's most prestigious literary award.

Professor Zhang has attained world renown as a scholar and prominent author on humanities and cross-cultural studies. His main research interest is in promoting cross-cultural understanding between China and the West, from the perspective of East-West comparative studies. He has been selected as a Foreign Member of The Royal Swedish Academy of Letters, History and Antiquities.