A number of recent graduates of City University of Hong Kong (CityU) have been admitted to postgraduate programmes at some of the world’s top universities, including Cambridge University and Oxford University in the UK, where they will continue their pursuit of academic and research excellence. 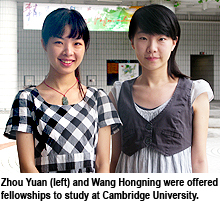 “The University is committed to nurturing and developing student talent and creating applicable knowledge to support social and economic advancement. Our students’ success demonstrates that CityU has attained the international benchmark of world-class institutions and that our students are competitive globally,” said Professor Paul Lam Kwan-sing, Vice-President (Student Affairs).

Three students from the Department of Economics and Finance have been offered fellowships to study at Cambridge University. Wang Hongning has been admitted to the masters degree programme in Real Estate Finance, while both Zhou Kezhong and Zhou Yuan will complete masters degrees in Economics. “I have to thank CityU for providing me with this valuable opportunity to further my studies in a renowned university steeped in such rich history. CityU’s international ambience and focus on professional education has laid a sound foundation for me to pursue my masters degree in the UK,” said Wang Hongning. 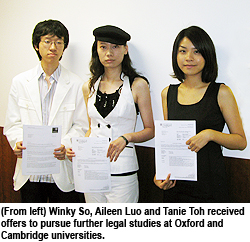 Three students from the School of Law (SLW) received offers to pursue further legal studies at Oxford and Cambridge. Winky So Wing, a graduate from the school’s LLB programme, has been awarded the British Chevening Scholarship to the Oxford University’s Bachelor of Civil Law programme, which is arguably the most esteemed masters degree level qualification in the common law world. “The legal education at CityU has equipped me with the necessary skills to pursue higher studies, having provided various opportunities for us to be taught by leading academics and professionals,” said Winky So. Chevening Scholarships and Fellowships are prestigious awards funded by the Foreign and Commonwealth Office and administered by the British Council.

Aileen Luo Chenxuan and Tanie Toh Wai-yin, LLB and PCLL graduates from SLW, have been admitted to the LLM programme of Cambridge University.

Jamie Zhan Bao from the Department of Biology and Chemistry is another outstanding graduate who will pursue graduate studies in Oxford. She is one of only five students accepted into the four-year graduate programme in Chromosome and Developmental Biology: the Cell in Heredity and Development.

Other CityU graduates have been offered admission to leading overseas universities such as Stanford University, University of Warwick, Cornell University and Columbia University.