The School of Creative Media (SCM) at City University of Hong Kong (CityU) staged the opening ceremony of its media art show on 24 June at the InnoCentre in Kowloon Tong. The theme of the exhibition, “+” (a plus sign and the number 10 in Chinese), signifies the 10th anniversary of the school. It also represents the integration of different media that showcase the SCM students’ creativity and media knowledge, as highlighted by the graduation show, “Medialogue,” and the Year 1 and 2 students’ exhibition, “Playful Media.”. 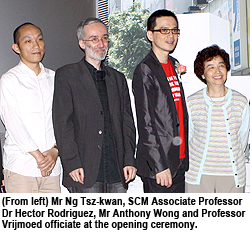 Professor Vrijmoed said the show was the result of a combined effort by students and teachers. “You will soon be entering the job market and I hope you make use of what you have learnt at CityU and market your ability to potential employers,” she told graduates.

Graduate Chris Cheung Hon-him gave a performance at the opening ceremony with his work “Rubbish’s ID”, playing music with a bar-code reader and labels collected from different food packages. He recently received the Special Mention Award in the Interactive Media category at the 14th Hong Kong Independent Short Film and Video Awards.

The SCM exhibition will run for five days from 25 June, showing around 100 artworks produced by SCM students and graduates. They range from photos, animations, short films and conceptual works to interactive installations that allow visitors to participate. Displays are projects completed by SCM students who have graduated from the bachelor’s and master’s degree programmes and students from the Bachelor of Science (Hons) Creative Media programme. 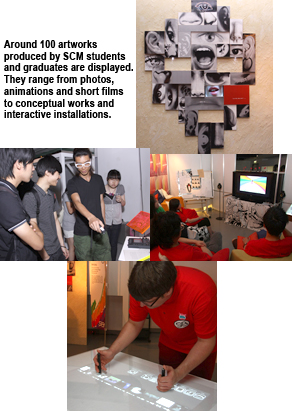 “On the 10th anniversary for the School of Creative Media, we can proudly reflect upon having nurtured a new generation of transmedia specialists who have not only contributed to the local creative industry but have also had a beneficial influence on industries as diverse as film, advertising, computer graphics, information technology and multi-media production,” said Chair Professor Horace Ip ho-shing, SCM Acting Dean. “The cultural and creative industry is one of the new economic pillars of Hong Kong as identified by the government. The school will contribute by training young professionals who are skilled in the use of digital media technology and versed in the art of storytelling.”

To the SCM students, the graduation show is an opportunity to showcase their works. It has become a tradition for the graduates to organise the annual event by themselves. Ray Lam Pui-wai, organising committee president of “Medialogue”, said they treated every exhibit item with equal importance. “We hope the community can see that CityU students produce such sophisticated and high quality works. We want visitors to appreciate our creativity,” Ray said. Laura Li Dan, organising committee president of “Playful Media”, said, “We would like to demonstrate the diversity of the art and the students’ hard work and achievements.”

In addition to the exhibition held at InnoCentre Exhibition Chamber One and Room 501, a screening will be held at the Agnès b. Cinema at the Hong Kong Arts Centre from 27 to 29 June. A director’s forum will be staged at CityU campus from 26 to 28 June, featuring local film workers exchanging views on movies with SCM students. For details, please visit www.medialogue09.com and www.playfulmedia.hk.