The Centre for Marine Environmental Research and Innovative Technology (MERIT) led by City University of Hong Kong (CityU) has been awarded HK$23.6 million sustained funding from the University Grants Committee (UGC)’s Areas of Excellence (AoE) Scheme. The sustained funding is only granted on exceptional grounds to AoE projects with excellent performance, and in this case, in recognition of the centre’s outstanding contributions to research and management of the marine environment in Hong Kong and worldwide. 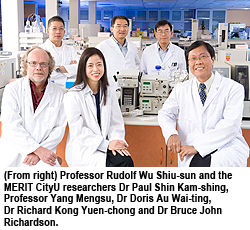 Since being selected by the UGC in 2004 as one of Hong Kong’s areas of excellence and receiving funding worth HK$45 million, MERIT has been at the forefront of marine environmental research. Much of its research has attracted worldwide attention and had a significant global impact. A team of six international reviewers unanimously commended its cutting-edge marine environmental research and management. They also praised its excellent integration of research in biology, chemistry and engineering, from genes and molecules to the entire ecosystem, as breathtaking and key to enabling a truly interdisciplinary approach to managing the environment.

This additional funding is for a period of three years, and will be further matched with an equal amount of funding from the six collaborating institutions. The MERIT team led by Chair Professor Rudolf Wu Shiu-sun from CityU’s Department of Biology and Chemistry will focus on the research of major foreseeable threats to the marine environment in the next decade. Key research programmes to be undertaken include:

l control and bioremediation technology in removing these chemicals in effluents and the environment;

l assessment of risk and predicting the effect of these chemicals on marine ecosystems and public health. 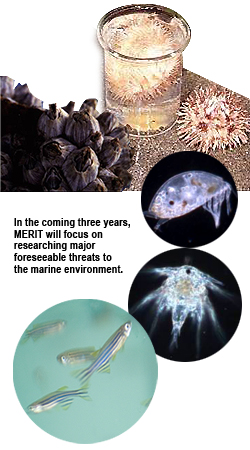 With state-of-the-art technology developed over the past five years, MERIT will concentrate on studies that enable team members from different disciplines and institutions to collaborate to conduct cutting-edge research leading to significant global advances and a stronger emphasis on its application.

“We are pleased MERIT has been recongised as the world’s leading centre on marine environmental research. This funding has allowed us to work as a coherent group and go beyond the strength of individual institutions alone to benefit Hong Kong and beyond. We will continue to nurture young scientists and develop Hong Kong’s capabilities in marine environmental research,” said Professor Wu.

Looking ahead, Professor Wu said MERIT would also leverage its research and application capabilities to encourage international knowledge transfer. In recognition of its leadership in the field, MERIT was last year designated by the United Nations as the first “Regional Centre of Excellence in Marine Pollution” and has been invited to conduct a training workshop during the East Asia Congress in November 2009, to promote new knowledge and novel technology to the eleven member countries.