The Chinese Civilisation Centre is holding the exhibition, “Intertwined - The Art of Gao Made and Chen Ruqin,” at the City University of Hong Kong (CityU) Gallery until 5 July. More than 60 artworks by the late Mr Gao Made, renowned Chinese opera characters painter, and his wife Ms Chen Ruqin, who is also a famous woodblock print astist, are on display.

The opening ceremony was held on 14 May, officiated by Ms Chen, Ms Belinda Wong Sau-lan, Chief Curator of Hong Kong Heritage Museum, and Professor Cheng Pei-kai, Director of Chinese Civilisation Centre. In his welcoming address, Professor Cheng said, “The word ‘intertwined’ refers not only to the deep affection between Mr Gao and Ms Chen, but also to the blending of Chinese opera and visual art.” 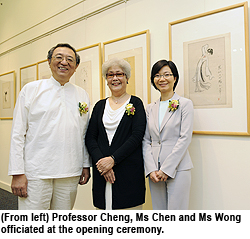 CityU held an exhibition of Mr Gao’s Chinese opera character paintings in 2006. Since then, Professor Cheng has been collecting and sorting Mr Gao’s artwork. During this process, he was alerted to Ms Chen’s artistic endeavours and subsequently inspired to organise an exhibition capturing the affection evident in the couple’s art.

“My husband and I lived together for 60 years. We shared the same interests and hobbies, admired each other and never ran out of conversational topics. We often created artworks for each other and sometimes became so focused on the creativity process that we wouldn’t stop to eat or sleep,” said Ms Chen. “The artworks displayed in the exhibition serve as a chronicle of our happy and harmonious creative life together.”

Most of the works in the exhibition comprise portraits of characters in Chinese operas and love songs of the Miao ethnic group, with some depictions of flowers and animals. Blending the bold cartoon art and delicate Chinese brush painting, Mr Gao’s works manifest a unique style. Imitating her husband’s paintings, Ms Chen employs colour woodblock prints to recreate the artistic style of ink paintings. 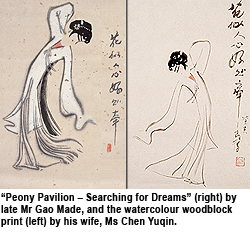 Chinese culture into his paintings. After he got married, he was engaged in editorial work for news pictorials and focused on drawing cartoons. In the 1970s, his many children’s books were published and distributed in mainland China. From the 1980s, he concentrated on painting Chinese opera characters. Adopting an abstract ink painting style, Mr Gao evoked a lively mood and rich tone in his works.

Ms Chen studied western painting and graduated from the Department of Western Painting at Hangzhou National College of Art (now China Academy of Art). After marriage, she often worked with her husband and watched Kunqu opera together. Ms Chen’s enthusiasm for watercolour woodblock prints and Chinese ink painting saw her depict the opera characters drawn by Mr Gao, as well as flowers and subjects drawn from daily life, in her works.

“Intertwined - The Art of Gao Made and Chen Ruqin” opened on 15 May at CityU Gallery on Level 6 of the Amenities Building at CityU, and runs from 10:00 am to 7:00 pm daily until 5 July. Further details can be found at CityU’s Chinese Civilisation Centre.