Professor Way Kuo, President of City University of Hong Kong (CityU), took part in a Taiwan forum on fostering a new generation of top quality university graduates. The 8 April event was organised by CommonWealth Magazine. Joined by other Taiwan university presidents, government and entrepreneurial representatives at a cross-sector discussion, Professor Kuo outlined his views on the future development of Taiwan universities and strategies for nurturing international professionals.

Participants probed various issues from the perspective of the education, corporate and government sectors. Topics discussed included the specific qualities required of the new generation professionals in order to contend with an ever-changing globalised world, and educational philosophy and vision in relation to universities cultivating new generations of professionals and social leaders.

higher education in his welcoming speech. He pointed out that mobility between academic departments and disciplines, between cities and rural areas, and in international exchange would help foster a new generation of top quality Taiwanese professionals.

The forum began with a presentation on Taiwan’s higher education outlook for the next 20 years. Mr Ovid J. L. Tzeng, Minister without Portfolio of Taiwan’s Executive Yuan, Professor Wu Chung-yu, President of the National Chiao Tung University, and Mr Douglas Hsu Tong, Chairman of Far Eastern Group and Board of Trustees of Yuan Ze University, sketched and analysed the future blueprint of Taiwan’s higher education from their own perspectives.

Mr Tzeng estimated that only about 100 of the current 165 universities will remain in Taiwan in 20 years as a result of competition and consolidation, with a much clearer division of roles among the remaining institutions. As for students, about 15% will be enrolled in research-oriented universities, and the family income gap between students will be significantly reduced. Also, the source of students will be more diversified, with more than 20% coming from overseas. The evaluation of universities will be based on their individual features, focusing on their social contribution index rather than on a science contribution index alone. Students will not be limited by their major studies but will acquire cross-discipline knowledge and skills to solve different types of problems.

Professor Wu pointed out that students will no longer be spoon-fed their education, with teachers no longer assuming a position of such relative authority. Instead, teachers will become students’ learning partners in exploring knowledge. As learning will not be exam-oriented but concept-driven, both teachers and students will be required to adjust their mindset. Research is now driven by projects, but in the future it will be driven by laboratories to ensure sustainable development.

With his dual capacity as an entrepreneur and Chairman of the Board Trustees of Yuan Ze University, Mr Hsu (nicknamed “Mr Optimum”) advocated a dynamic optimal balance. He said the education sector should communicate with industry to nurture appropriate professionals that meet the needs of enterprises. He was openly critical of the waste of resources that stemmed from having so many universities in Taiwan, which only has a population of 23 million. “A factory must be aware of market needs when it manufactures its products. Is it necessary for us to produce so many university graduates?” said Mr Hsu. “The new generation of professionals must be able to serve industry, society, the country and even the whole region.” He also emphasised that new university graduates should not only be equipped with specialised knowledge but also a broad base of knowledge in liberal arts and ethics. 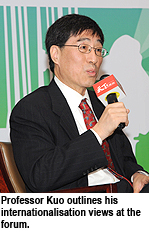 Professor Kuo said internationalisation places an emphasis on communication but not solely on verbal communication. “The Japanese and Koreans may not have the same levels of English proficiency as the Taiwanese but they coped better with internationalisation due to a focus on their own strengths,” said Professor Kuo. He pointed out that prominent humanities scholars such as Mr Cai Yuan-pei and Mr Hu Shi may have been the role models of university presidents 100 years ago. However, it is only natural that science and technology are emphasised more in this era of science and technology. "The focus will definitely change again in the future. There will be a great deal of changes in 20 or 30 years. However, the basic principle will not change. Adapting to change is essential,” he added. 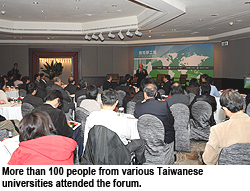 Professor Wu emphasised that the world was, in some respects, flat. Future professionals of one county will have to compete against talent from all over the world on the same platform. Therefore, Taiwan universities should collaborate with overseas institutions to offer more dual-discipline programmes to nurture more students with double degrees. Academic departments should not be isolated in an ivory tower and students should not be content to stay within their comfort zone.

Mr Tzeng remarked that internationalisation should involve academic, cultural and service exchanges as well as the exchange of teachers and students. Mr Hsu, on the other hand, suggested that the new generation professionals should be able to adapt to mobility and collaborate with people of different cultures and regions. They must be equipped with expertise in their own fields as well as general knowledge and skills in arts and humanities.

CommonWealth Magazine is an indigenous magazine that has a long and respected tradition of covering education, as well as other issues. More than 100 participants took part in its latest forum, including university presidents, vice presidents, faculty deans and department heads from different tertiary institutions in Taiwan.