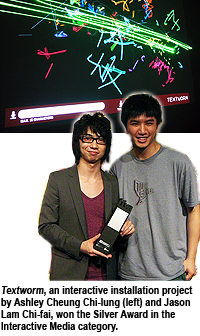 The Silver Award in the Interactive Media category went to the project Textworm by Ashley and Jason. Textworm is an interactive installation in which players can type words and use a laser pen to cut the words. Destructed parts float around the canvas like worms. When they collide, the destructed parts will combine and become new symbols, the meanings of which are left for the player to define. In the participation, player can gain an experience on construction, destruction and reconstruction.

Ashley and Jason felt the Silver Award encouraged them to continue with their creative work and join other competitions. Jason said that in addition to his interest in interactive media, the knowledge he acquired from SCM and observations from daily life were the key to success. Ashley pointed out that apart from media art, the computer knowledge taught at SCM helped him utilise his knowledge and techniques in his creation. He thanked his senior classmate, Choi Chi-chung, for lending him the venue and equipment.

Will, in his second year of the master programme, and Chris, a Year 3 student in the undergraduate programme, were awarded Special Mentions in the Interactive Media category. Will’s Black Box is a specially designed dark room isolated from any light outside. A computer that can decode texts to flashing light is set in the middle of the room, and the text is read aloud via text-to-speech synthesis. When the player enters the room, the flashing light is disturbed and the message altered to form a different text. Will pointed out that in the contemporary world people are vulnerable to receiving wrong messages. Black Box allows the player to experience receiving wrong messages unconsciously. Will felt the award urged him to consider a future in creative media. 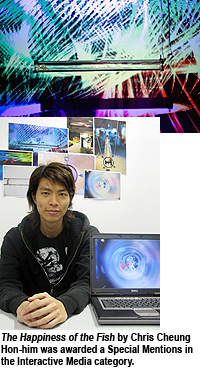 The Happiness of the Fish is a work modified from Chris’s graduation project. Chris put a goldfish in a transparent tube and used a sensor to detect the movement of the goldfish. An array of different coloured patterns were projected onto a wall while sound was emitted. The audience can try to fathom the meaning of the audio-visual projection. The creation was inspired by a famous quotation from Zhuangzi reflecting human beings are not fish, so how do they know if fish are happy or not. Through his work, Chris hopes to demonstrate the subjectivity of people. “I want to pay special tribute to Mr Ip Yuk-yiu, Assistant Professor of SCM, and Mr Bryan Chung Wai-ching, Lecturer of SCM. They enriched my three years of study and gave me invaluable guidance and inspiration,” said Chris. 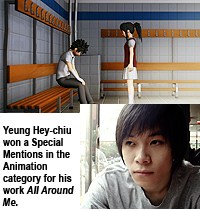 Students from the School not only excelled in interactive media creation, but also animation production. Yeung Hey-chiu won a Special Mentions in the Animation category for his work All Around Me. The story portrays a gymnast who loses his self-confidence after a training injury that renders him incapable of practicing. With the support from his peers, he is eventually able to regain his self-confidence. Combining three-dimensional graphics with special lighting effects, Yeung Hey-chiu created a mood to capture the close relationship between people.

CityU not only cultivates students with academic excellence, but also encourages students to contribute to society. Graduate Chan Chun-hei joined the School’s Creativity-in-Action Programme and, with two other classmates, spent more than a semester running a workshop and teaching more than ten Form 3 and Form 4 students to express themselves through creative means. The students obtained a Special Mentions in the Youth category with a video clip, The Empty Body, which was led by Chan Chun-hei. Being an experimental tutor of the students, Chan Chun-hei was excited the secondary students had achieved such success.