Three students from the School of Law (SLW) at City University of Hong Kong (CityU) garnered grand prizes, including overall runner-up and the Oxford University Press Award for the Best Non-OECD Team, at the Frankfurt Investment Arbitration Moot Court Competition held in Germany. The only team representing Hong Kong in the competition, CityU’s delegation was competing in a field of 27 teams from renowned universities around the world.

The winning team members were Postgraduate Certificate in Laws students Vicky Chung Wing-kay and Candy Tang So-man; and Winki Lam Wing-kei, Juris Doctor student. Their outstanding performance in the international competition is not only testimony to their professional knowledge and debating skills but also their international competitiveness. 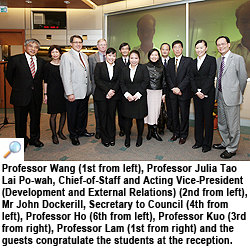 At a celebration reception held by SLW for the three students on 12 March, Professor Way Kuo, University President, commended the achievements of the SLW_mootcomp_L.jpg students, “In addition to professional knowledge, law students should also be equipped with a quick wit and excellent debating skills. Winning prestigious awards and defeating students from different

countries in an international contest SLW_mootcomp_L.jpg is testimony to the strengths and capabilities of our students on the world stage.” Professor Richard Ho Yan-ki, Provost, and Professor Paul Lam Kwan-sing, Vice-President (Student Affairs), also congratulated the students at the reception.

Professor Wang Guiguo, Dean of SLW, said it was an invaluable experience for CityU students to compete with students from so many well established universities in a highly competitive contest. It was even more commendable for the three students to win the international awards against such strong opponents. “It not only brings glory to SLW and CityU but also reflects well on Hong Kong as well as the entire China and an honour of all the Chinese people. I would like to extend my heartfelt gratitude to all the long-time supporters to SLW,” said Professor Wang. 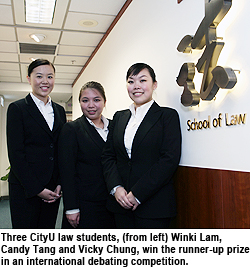 The Frankfurt Investment Arbitration Moot Court Competition was organised by the Wilhelm Merton Centre of Frankfurt University. The case study used as the debate topic in this year’s competition involved a British merchant who sued the US government at the end of its civil war in 1865 for a ship forfeited by the country during the war. Under the title of “Private (or Pirate) Investment - Gone with the Wind?”, the case posed a challenge to the students who not only had to understand the historical background of the case but also had to study literature relating to the war. Twenty seven teams from distinguished institutions, such as Georgetown University in the US, La Trobe University of Australia and Johannes Gutenberg Universitat Mainz in Germany, participated in the debate in a moot court environment.

Vicky said it was very important to have employed cooperation between team members in such a high quality contest. “It was a precious experience for me to apply my legal knowledge and debating skills learned at SLW in a competition against students from so many top universities,” she said, reflecting the competition taught her how to keep calm and cope with unexpected problems.

Candy said winning the awards showed the ability of local Chinese students was in no way inferior to English students in an international competition. The keys to winning the runner-up prize were excellent teamwork and diligent study of related information. Her self-confidence and courage in public speaking were bolstered by the competition.

Both Vicky and Candy were grateful to their teachers and SLW for their supervision and teaching. “Without the continuous guidance and advice of our teachers and the trust and support of the school, we would not have been able to attain today’s achievement,” said Candy.