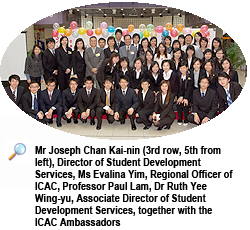 At the closing ceremony, Professor Paul Lam Kwan-sing, Vice-President (Student Affairs), expressed gratitude to ICAC for their support. He pointed out that one of the core values of Hong Kong was the establishment of a fair society and that universities should help spread the message. “Universities have the responsibility to nurture professionals with principles and business ethics. I hope that together with ICAC we can continue with this scheme to impart appropriate moral values to students,” said Professor Lam. 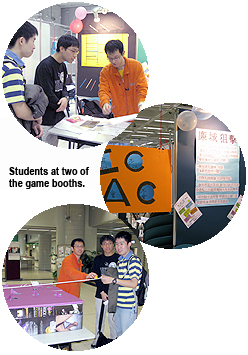 CityU is the first local tertiary institution to stage the ICAC Ambassador Programme, which ran for 12 months this year on the theme "New Clean Leaders with Integrity". The 41 students selected by ICAC visited its headquarters and attended workshops to learn more about the operation of the commission. They also participated in a leadership training camp to enhance their organisational skills. After training, they had to submit proposals on how to disseminate the anti-corruption message on campus, and organised the “City．Integrity．Achievement” campaign from 5 to 13 February.

Louis Lo Ho-yin, a Year 2 student from the College of Humanities and Social Sciences and Chairman of the organising committee, said students were divided into four groups to discuss their campaign ideas. “During our discussions, there emerged various opinions that I had to consider before making a final decision. The process allowed me to understand how to strike a balance between various parties and incorporate different ideas,” said Louis.

Clara Tang Sin-ming, another Year 2 student from the College of Humanities and Social Sciences, was one of the four group leaders. She had learnt a lot from the leadership training camp. Participants took part in activities such as assembling a wooden raft and scaling climbing walls. As these activities were new to most participants, they were a bit frustrated in the beginning and did not know how to start. “Eventually I found that this could be solved by assigning the work to each member and this boosted our team spirit,” said Clara.

The activities held for the “City．Integrity．Achievement” campaign included a slogan composition competition, impromptu speech contest, exhibition, game booths and “My Favorite ICAC Advertisement” election. The organising committee hoped these activities could help students understand the importance of integrity and promote it on campus and in the city. Students could help people around them develop appropriate values that could sustain their achievements in life and contribute towards a fairer society. 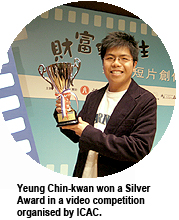 Along with the ICAC Ambassador Programme, the University also encourages students to promote the anti-corruption message through different channels. Yeung Chin-kwan, a Year 1 student of the Associate of Arts in Media Technology programme of the School of Creative Media, won the Silver Award in the open category of the Wealth and Life Video Competition organised by ICAC. He was both the director and scriptwriter of the video. His winning entry entitled “Would It Be You?” was a silent short video. It described how an ordinary lady working hard for a living discovered happiness through her observations of how other people live. “I hope my video can help people reflect on the meaning of life and their lifestyles. By comparing themselves and the heroine of the film, they may reconsider the correlation between wealth and life,” said Yeung Chin-kwan.