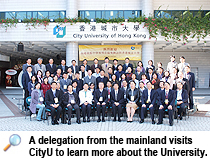 A delegation of key secondary schools from 12 provinces and major cities of China visited City University of Hong Kong (CityU) on 28 November to learn more about its admission exercise next year and its teaching and research facilities. The 40-strong delegation comprised principals, academic deans and senior teachers of those schools. 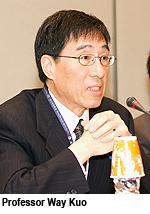 Professor Way Kuo, President of CityU, delivered a welcome speech, in which he expressed his gratitude to the key secondary schools in mainland China for sending to CityU their select graduates, which is "also a great support to China's future educational, social and economic developments", as he pointed out. Professor Kuo emphasised that CityU is the only one among universities in Hong Kong that focuses on professional schools. He believed that the practice would contribute directly to society and that "it is exactly what's most needed in mainland China today".

Mr Wang Sheng, Principal of Qidong High School in Jiangsu Province, spoke on behalf of the delegation. He said mainland schools and universities can draw on the experience of Hong Kong's higher education sector in providing an all-round and internationalised education. He hoped that universities in Hong Kong including CityU would promote more actively in mainland China about their programmes, admission procedures and future careers of their graduates so as to attract more students to Hong Kong.

Mr Ji Jianjun, a Division Chief under the Education, Science and Technology Department of the Liaison Office of the Central People's Government in Hong Kong, pointed out in his speech that Hong Kong universities are endowed with strong faculties including many world-class professors, excellent teaching and research facilities, and advanced pedagogic ideas and academic achievements. On the mainland, higher education institutions have a wider range of disciplines and an abundant pool of talent. He believed, therefore, that Hong Kong and the mainland would do well to complement each other's advantages in the higher education sector.

Present at the reception were current students and earlier graduates of CityU who are from the mainland. They shared their study and life experiences at the University.

Foundation year student Chuan Yinghong said she chose to study in Hong Kong not only for its excellent English environment and a mixture of Eastern and Western cultures, but also for its western-style pedagogic ideas and teaching methods. By studying in Hong Kong she will be better prepared for further studies anywhere later on.

Year 2 student Sally Qian Jiaojiao said she was most impressed by how CityU received new students. It arranged for student-mentors to start helping her even before she came to Hong Kong so that, instead of feeling lonely, she adapted easily to life on the campus.

Year 3 student Li Shu said she was most impressed by the freedom she had in deciding on her major. In the foundation year at CityU students do not need to choose their major, so she was able to find out and decided on the specialised field she really love while taking the preparatory courses.

Geng Chunya graduated from Qinghua University in China, later studied at CityU and graduated with an MPhil degree. After that he worked in Hong Kong and became a venture entrepreneur and a public figure. He spoke highly of the openness and tolerance of Hong Kong universities, and expressed great thanks to CityU's professors and administrative departments for their support in his work after graduation.

Professor Paul Lam Kwan-sing, Acting Vice-President (Undergraduate Education), briefed the delegation on the undergraduate education at CityU. He told the visiting school leaders how CityU helped prepare mainland students for their academic studies, daily life and psychological adaptation. Professor Lam also pointed out that CityU places great emphasis on training students to be professionals by giving them opportunities of fieldwork and international exchange. At present, 25% of its students can go on exchange programmes overseas and this figure is expected to rise to 50% in the future.

Staff members in charge of mainland recruitment from the College of Business, the College of Humanities and Social Sciences, the College of Science and Engineering, the School of Creative Media and the School of Law gave a briefing on the features and strengths of their respective colleges and schools. Afterwards, the delegation visited CityU's research institutes and other facilities, and had a gathering and talk with students from the mainland.

Receiving mainland key secondary school delegations is a traditional annual event at CityU. Dr Zhu Guobin, Director of the External Liaison and Cooperation Office, explained that this is an effective recruitment tool for CityU. In the long run, this will enhance the image of CityU and promote its ties with mainland universities and key secondary schools. Dr Zhu expressed his hope that the quality of the new recruits would be further improved in the coming year.