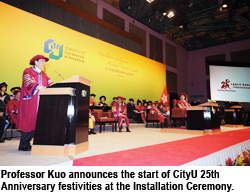 President Professor Way Kuo officially announced the start of the City University of Hong Kong (CityU) 25th Anniversary festivities on 11 November, pointing out that the year ahead represented an unprecedented opportunity to highlight the University's achievements and emphasis on quality teaching and research.

In conjunction with the silver jubilee launch, a special anniversary website ( www.cityu.edu.hk/cityu25 ) and the World-class University anniversary logo were also unveiled. The establishment of the 25th Anniversary Organising

Committee,chaired by Dr Ellen Ko Law Yin-lan, Vice-President (Administration), will ensure the occasion is marked by a host of fascinating educational and culturally significant events.

Speaking at his presidency installation ceremony, Professor Kuo said CityU had made impressive strides in the past quarter of a century to become a world-class university and was taking bigger steps to improve its standing among the world's best institutions.

"As CityU advances into its 25th year of operation in 2009, the University community has reason to feel proud for having made CityU so successful in a relatively short span of time," said Professor Kuo.

Professor Kuo pointed out the anniversary would be marked by many events that enhanced academic development and strengthened relationships with the University's many stakeholders. The range of distinguished lecture series being held at the moment was one such example of the special events that fulfilled this ambition.

Dr Ko said the anniversary would be an opportunity to showcase the University's excellence in teaching and research; unite staff, students and alumni; and foster relationships with our stakeholders.

"This is a celebration for everyone as we all play an integral role in the success of the University and ensuring its 25 year anniversary is one to remember," said Dr Ko.

Dr Ko said the organising committee welcomed feedback from all staff members and was open to staff suggestions of possible anniversary events that could be staged to mark the special occasion. Emails could be sent to the organising team at: cityu25@cityu.edu.hk 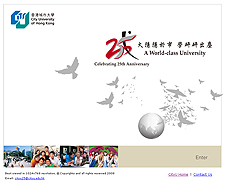 Among the highlight events will be a series of Distinguished Lectures by world-renowned scholars and Academician Conferences on energy and environment, biomedical engineering, engineering innovation and design, science and technology - policy and education.

The Anniversary Banquet provides a perfect occasion for those who care about the University - friends, supporters, donors, staff, students and alumni to come together to enjoy and celebrate. An Anniversary Concert by the CityU Orchestra and performers from different parts of the world will bring a rich flavour of arts and culture to the University's 25th anniversary. The Ocean Park Night promises to be a night of frivolity and fun during the Mid-Autumn Festival.

A book on CityU's history, in English and Chinese respectively, will also commemorate the occasion and further enhance the image of professionalism and dynamism the University has forged.

The University will also take the opportunity to show its appreciation of staff members' strenuous efforts over the years through the Long Service Award Ceremony. In sport, a Marathon involving staff, students and alumni will help foster cohesiveness and a strong sense of team spirit within the University community.