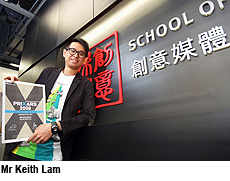 Mr Keith Lam Yan-kit, Instructor II of the School of Creative Media (SCM) of City University of Hong Kong (CityU), was awarded an Honorary Mention in the Prix Ars Electronica 2008 international cyber art competition in Austria for his work "Moving Mario". Of the 13 award winners his category, Keith is the only new media artist from Hong Kong.

Prix Ars Electronica has been held for more than 20 years and is one of the most renowned cyberarts competitions. This year, more than 4,000 artists from 62 countries have joined this competition.

Keith's artwork is inspired by the classic video game, Super Mario Bros. By improving upon some of the key concepts behind that game, "Moving Mario" challenges some of the conventional game elements. Throughout the gaming process, players can rethink the relationship between the player and the game.

Keith has taken about a year for his work from sorting the raw material to creating the artwork, and has encountered many challenges along the way. He thanked SCM for arranging his academic duties so that he could concentrate on his project.

"This award not only acknowledges my efforts but also lays a solid foundation for my future research. I will continue to improve my artwork and plan for new research projects," said Keith. 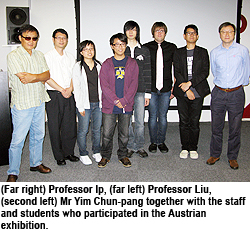 Four Bachelor of Science (Hons) in Creative Media students, Morgan Aasdam, Helen Kwong Man-fong and Nick Wan Lik-kwong of Year 3 and Andy Li Wing-ho of Year 2, were sponsored by the Hong Kong Government's IT Exchange Programmes 2007/08 to attend Prix Ars Electronica 2008. They had the chance to meet artists from all over the world and learn from their artworks.

IT Exchange Programmes 2007/08 was sponsored by the Office of the Government Chief Information Officer (OGCIO) and coordinated by the Hong Kong Cyberport Management Company. The objective of the scheme is to nurture talent within the Hong Kong creative media industry by providing opportunities for international exposure to the digital world. 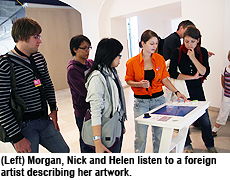 "During the exhibition, we had the chance to share new ideas with artists from all over the world. This broadens our horizons and inspires our creativity," said Morgan.

Nick said the exhibition provoked him to rethink ideas about presentation.

"We have visited a Future Laboratory and we can see different kinds of installation art. The Austrian artists have used new methods that we have never seen before to present their ideas."

They said that the Austrian trip was unforgettable and valuable. On the one hand, they had to arrange their itineraries and this helped them learn to be independent. On the other, they experienced the artistic atmosphere and culture of Austria, refining their appreciation of art.

Professor Horace Ip Ho-shing, Acting Dean of SCM, encouraged students to travel overseas and broaden their horizons. Professor Ip's work "Body Brush" had also won an Honorary Mention in this competition a few years ago. This is the world's best regarded cyber art event. "Our colleague, Keith, has won an Honorary Mention in such an internationally renowned competition. This is wonderful recognition for a Hong Kong new media artist and an honour to SCM. I hope more staff and students will devote themselves to art and contribute to the new media industry in Hong Kong," Professor Ip said.

Professor Liu Zhiqiang, programme leader of the Bachelor of Science (Hons) in Creative Media, said, "The four students were selected for this trip because they are highly interested in cyber art and have a passion for it. They also have good interpersonal and organisation skills, and are very self-initiative."

Mr David Chung Wai-keung, Head of the IT Operations of Hong Kong Cyberport Management Company, said that, under OGCIO's sponsorship, more than 100 students have been selected over the past three years to participate in exchange programmes all over the world and learn about the latest information technology and new media developments. "The SAR Government places great emphasis on the creative industries and Cyberport spares no efforts in fostering the next generation who will develop the industry. We hope we can create more opportunities for the next generation to participate in exchange programmes to broaden their technological vision and make contributions to the future development of the creative media industry in Hong Kong."