The annual CityU Banquet organised by the Students’ Union, City University of Hong Kong (CityU), was held on the evening of 31 October, bringing together the CityU community for a display of solidarity and camaraderie. 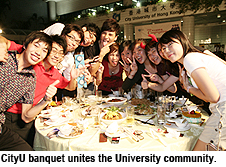 Enjoying the CityU Banquet for the first time, Mr Leung Chun-ying said in his speech, “I am so glad and honoured to be a CityU member. I hope being a Council Chairman will become the public duty with which I am 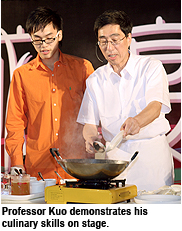 most satisfied with my performance.” Mr Leung added that he will meet the representatives of Students’ Union to gain further insight into the students’ way of thinking and discuss with them CityU’s development.

Having been with CityU more than 10 years, Dr Norman Leung Nai-pang said he was still excited every time he came to the campus. He was also pleased at having Mr Leung and Professor Kuo as CityU’s Council Chairman and President respectively, and was proud of the outstanding achievements the University had made over the past 24 years.

Professor Kuo said he believed that CityU’s future would be as nice as the weather that prevailed on the night of the banquet. Professor Kuo also presented a gift to the outgoing Professor Tong. 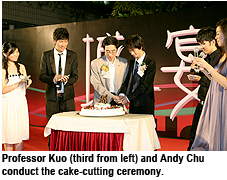 salty and sour cabbage live on stage. The students on Table 31 had the honour of sampling Professor Kuo’s dish. Performances by CityU Chau Ka Chinese Martial Arts Association, Magic Society, Dancing Society, students’ Halloween dress-ups and costumes, together with the vibrant applause and cheers of guests ensured the banquet was a joyful occasion.

After the lucky prize draw, Professor Kuo and Andy Chu Ka-kit, President of the Students’ Union, held a cake-cutting ceremony, symbolising the soft opening of the 25th anniversary celebration, and a wonderful end to the night.