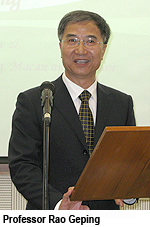 The School of Law at City University of Hong Kong (CityU) hosted a talk on 30 October entitled "Application of International Treaties in Chinese Domestic Law" featuring as speaker Professor Rao Geping, Director of the International Law Institute of Peking University.

The lecture was under the aegis of the CityU School of Law's Eminent Speakers Lecture Series. It addressed the status of international treaties and their implications for Chinese domestic law. Also discussed was the application of international treaties in China and those laws affected by this issue. Professor Rao's visit is illustrative of CityU's strong ties to mainland legal experts and served to strengthen ties between the two law schools. 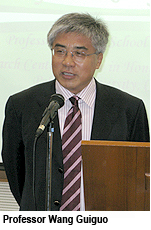 "Through this talk, we will gain a deeper understanding of the situation regarding the application of international treaties in China and learn more about the mainland legal system," said Professor Wang Guiguo, Dean of the School of Law.