City University of Hong Kong (CityU) has earned significant academic acclaim in recent years. In addition to its place among the top 200 universities in the world by The Times Higher Education Supplement for five consecutive years, including the latest position as the 147thin the 2008 survey, CityU also ranks among the world’s top 50 for its engineering research papers, according to a Taiwanese survey. 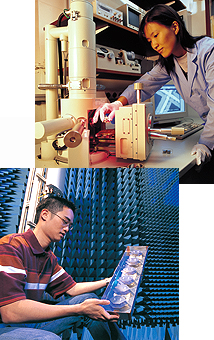 According to Evaluation Bimonthly, published by the Higher Education Evaluation and Accreditation Council of Taiwan, CityU now ranks number one in Hong Kong and 45thin the world for engineering research papers.

The council was set up through a joint endowment from the Ministry of Education in Taiwan and universities, for conducting university evaluations. The council first conducted its performance ranking of scientific papers for world universities in 2007. This year, the survey has included 700 universities from around the world.

The project employs bibliometric methods to analyse scientific papers produced from 1997 to 2007 in each university. The assessment was based on three specific areas: research productivity, research impact and research excellence.

Professor Way Kuo, President of CityU, said the University had achieved excellence in many fields through years of hard work by CityU members. For instance, the Faculty of Business is the only business school in the Asia Pacific region which has received triple accreditation. The School of Creative Media has nurtured the next generation of media professionals. The School of Law has opened more areas for cooperation and promoted internationalised teaching. The excellence in engineering and scientific research papers also reflected the outstanding achievements of CityU.

“CityU has a dual focus on teaching and research and an excellent academic and research team. At the same time we are looking for more teaching and research experts to take over potential subjects,” said Professor Kuo. “CityU still has room for improvement. By combining the efforts of our staff and students, I hope CityU can break into the world’s top 100 universities in the next few years.”