Mr Chung Shui-ming, the outgoing Council Chairman, hosted a thank-you reception on 26 September to express his gratitude for the support of the CityU community in recent years. 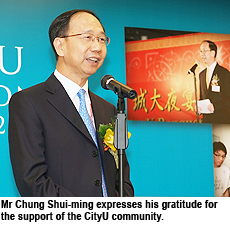 Having served CityU for a decade, Mr Chung said he had confronted many hurdles with the University, such as the financial crisis, SARS and budget cuts. He was glad that despite those challenges, CityU had maintained its commitment to nurturing professionals through quality teaching and research and was able to break into the world’s top 150 universities. He was proud to be a CityU member.

“CityU has left me with three ‘flavours’, neither sour nor bitter, but a valuable experience, an unforgettable memory and a cherished friendship,” Mr Chung said. “I look forward to CityU reaching new heights and wish colleagues all the best.” 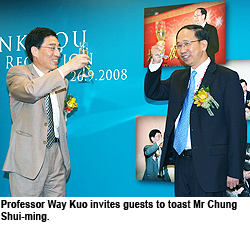 Mr Chung singled out the article titled “A real hermit lives downtown”, from University President Professor Way Kuo’s blog, to illustrate his plans. After handing over the reins, Mr Chung said he would like to enjoy his life while still contributing to society.

Professor Kuo was grateful for Mr Chung’s continuous support. “The contribution made by Mr Chung, including his role as Council Chairman has ensured CityU’s distinguished reputation. He is really a coach who helps this university excel,” Professor Kuo said.

Professor Kuo concluded his speech by offering three wishes for Mr Chung, whom he hoped would continue to give CityU his support. 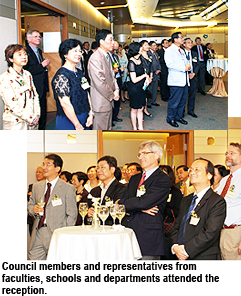 “I hope he supports us, just like water keeps flowing down from a mountain; I hope our love with him and friendship among us will last forever; and furthermore, as educators, I hope we make our decisions based on the truth,” Professor Kuo said.

Mr Chung was appointed Chairman of the University Council in June 2006. Before taking up the post he had served on the Council for more than eight years and had held the position of Deputy Chairman since 2004. He served as Treasurer from 1999 to 2003 and was concurrently Chairman of the Finance Committee and Board of Trustees. Under his leadership, the University was able to maintain a healthy financial position in a very adverse economic environment. Mr Chung chaired the Working Group on Associate Degrees and was instrumental in arriving at a solution that ensured a future for the Associate Degrees and set the framework for the establishment of the Community College of City University. He also chaired the Strategic Development Committee and helped craft the University’s new Mission Statement.