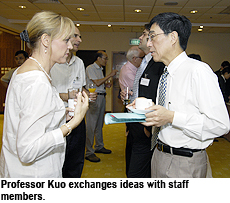 Kong (CityU), to allow them to freely express their opinions about University affairs in a relaxed atmosphere.

Colleagues asked Professor Kuo questions about the University's policies and made constructive suggestions on issues such as the restructuring of the University and the benchmarks for teaching, research and other services. Professor Kuo responded to each issue in detail.

He indicated that the organisational restructuring was aimed at preparing the University to meet the challenges of future development. Stipulating that teaching and research should be regarded as being equally important, he encouraged colleagues to make diligent efforts not only on teaching, but also on research, with an objective of passing their research knowledge to students. Professor Kuo added that he would also encourage undergraduates to conduct research.

"The planned changes are aimed at boosting the University's efficiency. To achieve this goal, the University will reward staff for outstanding performance," Professor Kuo said. 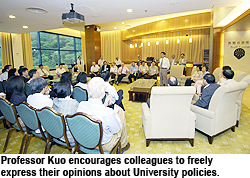 Colleagues attending the gathering welcomed the prospect of similar activities being held in the future by the management to promote better communication and understanding of the University's latest developments.

Dr Louis Ma Chee-keung, Acting Head of the Department of Information Systems, described Professor Kuo as open and willing to accept different opinions. "It is a good start to hold this kind of tea gathering, as it can enhance the transparency of the University administration and bolster the staff's confidence in management," Dr Ma said.

Professor Lo Tit-wing of the Department of Applied Social Studies said the gathering provided a valuable opportunity for colleagues to exchange ideas with University management.

Professor Kuo thanked colleagues for attending the gathering and promised to hold tea gatherings regularly in the future for faculty and staff members to express their opinions. "Through this kind of relaxing gathering, I hope to strengthen communication and provide more channels for staff to better understand the management and developmental direction of the University," Professor Kuo said.