Thirty-nine of us from the School of Law this summer joined the six-week long China Legal Placement programme to study Chinese law, visit legal institutions in Beijing and gain work experience at the Intermediate Courts and Local People’s Courts in Shanghai and Nanjing. 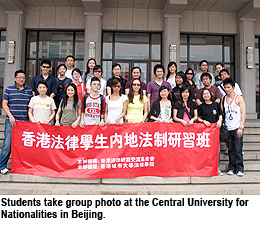 The China Legal Placement programme was organised by the School of Law as a bridge to narrow the gap between the legal systems of Hong Kong and mainland China.

Under the arrangement, we attended a daily three-hour class for the first two weeks to study Chinese law at Renmin University of China. Apart from Chinese law, the professors often digressed to cover issues such as terrorism and their views about the mainland, Hong Kong and Taiwan.

After class, we visited the Supreme People’s Court of China and other administrative offices in Beijing. We also explored the country’s scenic spots, such as The Great Wall and Tiananmen Square.

Two groups then travelled by train to either Shanghai or Nanjing, where we worked in either the Intermediate Court or Local People’s Court. The working day ran from 9am to 5pm, and involved following judges and listening to how they judged each case. We also discussed the cases before and after the hearings. 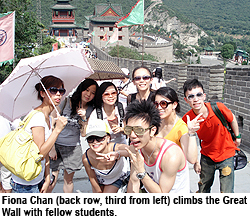 Some of the civil cases were quite trivial and should not have been tried but due to the relatively inexpensive court fees, more simple cases reached the courts.

Through the course of the legal placement, we were also provided the opportunity to learn about procedural law, thus enhancing our overall knowledge of the legal system.

When not working, students spent time visiting the city and exploring the nightlife and breathtaking tourist attractions.

The trip allowed us to acquire a better understanding of China’s history. This is especially relevant, as China’s history is, in fact, responsible for shaping today’s legal system.

Another great benefit of the programme was the availability of networking opportunities. During the course of the internship, we were accompanied by judges from the various courts, as well as local students who were currently studying master courses in law at local universities. Together we discussed many legal issues, such as the differences between the two legal systems under the “one country, two systems” principle.

The School of Law has done a great job with the China Legal Placement programme, which is now in its second year. We would like to thank the Chinese General Chamber of Commerce which provided a sponsorship of HK$150,000 under the Inter-exchange Programme for Tertiary Students 2008 to the School's full-time students.