An exhibition, "Ming Qing in the Eyes of Ming-Qing", showing around 80 items of antique Chinese calligraphy, paintings, musical instruments, decorative ornaments and daily commodities from Ming and Qing dynasties, is hosted by CityU Gallery at City University of Hong Kong (CityU) from 5 to 26 September. The exhibition exemplifies CityU's commitment to promoting Chinese culture. 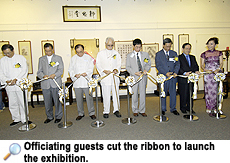 Professor Kuo said CityU valued the spirit of science and technology, and also paid much attention on Chinese culture and art. It was CityU Gallery's honour to host the exhibition and be surrounded by Ming and Qing antiques. 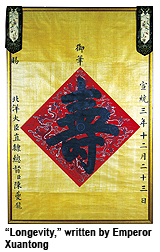 The exhibition consists of four parts, namely "Official Grandeur", "The Elegant World of the Literati", "Sophistication in Pleasure" and "Cultural Convoys". All display items are from the collection of Miss Wang and are of enormous historical value. Among the exhibits are calligraphy works from emperors, Chinese paintings, guqin, porcelain, furniture, sculptures and embroideries.

Among the most valuable displays is the calligraphy of a poem written by Qing Dynasty Emperor Daoguang when he visited a temple in 1820 to receive the blessing of the gods. Another special treasure is a Chinese character, "Longevity", written by Qing Dynasty Emperor Xuantong and given as a gift to a provincial governor just a day before the emperor abdicated his throne.

Two guqin exhibits shown in the exhibition feature instruments with engravings from their respective dynasties. A symbolic icon of Chinese culture, guqin has an elegant appearance and produces a crisp, melancholy sound. 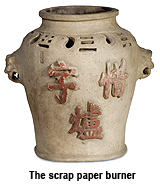 Another special cultural item on display is a scrap paper burner made during the Qing Dynasty. It was used by scholars in the Ming and Qing periods to burn scrap paper in deference to the written word. Very few such burners can be found these days, with the National Museum of History in Taiwan being one of the few museums in the world to house one.

The exhibition will be held at CityU Gallery on the 6th floor of the Amenities Building at CityU between 10am and 7pm from 5 to 26 September. Guided tours in English, Putonghua and Cantonese are arranged at 2pm, 3pm and 4pm respectively on 7, 14 and 21 September. For guided tour group appointments, please contact Mr Lui Chiu-wing at 2777 8415.