City University of Hong Kong (CityU) will confer honorary doctoral degrees on The Hon Mr Justice Patrick Chan, Dr Chow Yei-ching, GBS and Mr Sze Chi-ching, JP in recognition of their significant contribution to education and the well-being of society. The award ceremony will be held in November 2008. 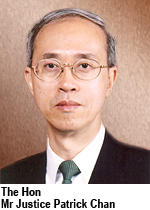 The Hon Mr Justice Patrick Chan, Permanent Judge of the Court of Final Appeal, will receive an Honorary Doctor of Laws. Mr Justice Chan received his Bachelor of Laws degree and Postgraduate Certificate in Laws from The University of Hong Kong in 1974 and 1975 respectively. He was the first Chief Judge of the High Court in the HKSAR and has served the Judiciary for more than two decades. He is best known for his contribution to the development of Hong Kong’s bilingual legal system. He was also the Chairman of the Chief Justice’s Working Party on Civil Justice Reform which was instrumental to the reform of our civil justice system to be implemented next year. Despite a hectic schedule, Mr Justice Chan has made a valuable contribution to education, particularly in the training of legal professionals and the development of local universities’ governance and management structures. In 2002-03, he led the Review Committee on University Governance and Management of CityU and made constructive recommendations on how the University’s governance and management structures could best cope with future challenges. His former presidency of the Scout Association of Hong Kong and active participation in various welfare and charitable organisations are further examples of his enthusiasm for public service. 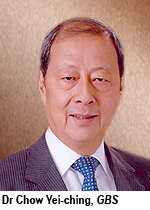 Dr Chow Yei-ching, Chairman and Managing Director of the Chevalier Group of Companies, will receive an Honorary Doctor of Social Science. Dr Chow has supported the development of universities in Hong Kong, including CityU, and on the mainland. CityU’s School of Graduate Studies was named in 2007 after Dr Chow in appreciation of his contribution to education in Hong Kong and support to the development of CityU’s graduate studies. A successful entrepreneur who emphasises on giving back what he has taken from the community, Dr Chow has been active in public service and taken up significant roles in many government and community organisations, including the Selection Committee for the First Government of the HKSAR, Standing Committee of the Chinese People’s Political Consultative Conference, Shanghai, Community Chest, Tung Wah Group of Hospitals and Yan Chai Hospital. He has won many awards, including a Gold Bauhinia Star from the HKSAR Government and an OBE (Officer, Order of the British Empire) from the Queen of England. 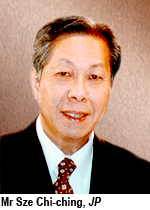 Mr Sze Chi-ching, Chairman of Hang Tung Resources Holding Limited, will receive an Honorary Doctor of Social Science. A prominent entrepreneur, Mr Sze has, since the early 1980s, been involved in many real estate and infrastructure projects in cities and provinces of mainland China. He has also been a resolute benefactor and supporter of education in Hong Kong and the mainland, not only through the establishment of funding for the development of education but also in the capacity of visiting professor, advisory professor and council member of various well-regarded mainland universities. Active in community services, Mr Sze was Hong Kong Affairs Adviser, member of the Selection Committee for the First Government of the HKSAR and The 8th, 9th and 10th National Committee of the Chinese People’s Political Consultative Conference (CPPCC), PRC. He is currently Vice-chairman of the Committee for Learning and Cultural and Historical Data of the 11th CPPCC and All-China General Chamber of Industry and Commerce, and a member of the Board of Directors with the One Country Two Systems Research Institute. He was appointed as Justice of the Peace by the HKSAR Government in 1999.