Following the installation of the orientation sculpture on 19 August

, several welcoming ceremonies were organised by Student Development Services of City University of Hong Kong (CityU) from 25 August to 27 August, to prepare incoming students for life at CityU. Academic departments also have complementary orientation activities in the pipeline to help familiarise students with their new campus and surrounds.

Professor Kuo congratulated the new students on joining CityU. He encouraged them to treasure their learning experience at the University, to forge friendships and to make good use of their knowledge so as to contribute to the betterment of society. “I have met many of you during other activities but I would like to reassure you once again that as a CityU student, you will be proud of CityU and CityU will be proud of you,” said Professor Kuo. 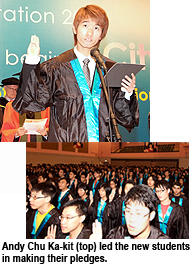 The robe presentation ceremony was then held, marking the commencement of the students’ university lives. Andy Chu Ka-kit, President of the Students’ Union, led the new students as they donned their CityU robes and pledged their commitment to the University.

Dr Bryan Wong Siu-fai, Vice-chairman of CityU Convocation, delivered a speech on behalf of CityU Convocation. He pointed out that the aim of establishing CityU Convocation was to consolidate alumni and organise and coordinate their support of the university’s development. “CityU students should be proud of CityU. Starting from today, each of you represents CityU. Let’s try our best to work towards an even better and brighter future for CityU,” said Dr Wong.

Staff and students later sang “City Legend” together, the theme tune from City Legend, the musical first produced to celebrate CityU’s 15th anniversary a decade ago.

Wang Bi-qiong, Pang Pei and Ji Yang, new students of the Faculty of Science and Engineering, said the orientation ceremony was very touching and a feeling of unity was evoked when the students sang “City Legend” together. Wu Liu-ying, a new student in the School of Creative Media, said she appreciated how well-equipped CityU was in all respects and looked forward to starting her university life with other students.