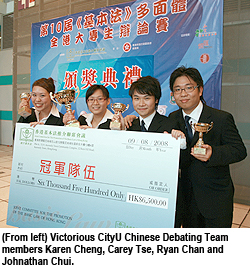 CityU stood for the negative side of the statement, “Universal suffrage can reconcile executive authorities and legislature”. Team members received the trophy from Mr Gilbert Mo Sik-keung, Deputy Law Draftsman (Bilingual Drafting & Administration) of the Department of Justice, HKSAR.

Johnathan, who was also the Chairman of the CityU Chinese Debating Team in 2007-08, said the championship title was won through hard work. “The topic this time was quite complicated so we spent a lot of time gaining an understanding of the relationship between the executive authorities, legislature, structure and the related concepts in order to present in a simple way to the judges and audience within just three to four minutes,” said Johnathan. He added that he learnt a lot during the process of preparation and participation and thanked coaches
Mr Jason Leung Hin-hang, Mr Kenny Cheng Kin-yat and Mr Yeung Tung-sing for their guidance and instruction. Johnathan won a Best Debater award in a heat. 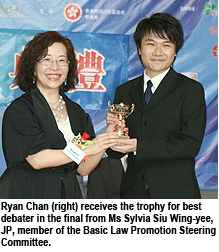 Karen Cheng, who also collected the Best Debater in the semi-final, concluded that to know your competitor well was the key to victory. “The team from Hong Kong Baptist University always performs well and is renowned for its sophisticated debating skills and innovative ideas, therefore we tried to think and analyse the topic from different angles, in order to break our competitor’s points accumulation,” said Karen.

Kenny Cheng, one of the debate team coaches and also an ex-team member, was consoled by CityU’s victory. He praised the whole-heartedness and vigour of the champion team.