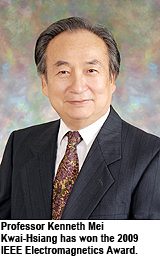 Professor Mei is the first Hong Kong academic, and the only one from an Asian university, to receive this acclamation since the award was established in 1996. He has been rewarded for his contributions to computational electromagnetics and Maxwellian circuits.

Radio wave (RF) problems are either solved applying circuit theory (Kirchhoff’s Laws) or electromagnetism (Maxwell’s eqiatopms). The circuit theory is simpler and can handle very complex circuits, but is effective only when the circuit area is much smaller than a wavelength. Traditional radio waves were in the megahertz range with wavelengths longer than 300 meters, while the third generation mobile phone is in the 2 GHz range and the wavelength is about 15cm. Since the communication industry is sure to pursue a higher and higher frequency range, the day will arrive when the silicon technology can no longer make a device much smaller than a wavelength. Professor Mei’s most recent work on Maxwellian circuits heralds a new discovery, which represents a merging of the two theories. It shall have a great impact on RF engineering once the frequency is doubled.

Professor Mei also invented the measured equation of invariance (MEI) in 1992, which has drastically reduced the computational effort and difficulty presented by large problems. This method can reduce the memory needs of many RF problems by one order of magnitude and the computational time by two orders of magnitude. Many problems which were too large to be solved are now within reach.

His influence can be found in the early development of all the above areas. His papers have been cited more than 1,600 times, according to the Science Citation Index in 2006.

Professor Mei joined CityU in 1994 as Chair Professor of Applied Electromagnetics, until 2006. He also led the University’s Wireless Communications Research Centre from 1998 to 2002, making a valuable contribution to the development of wireless communication technology addressing the immediate and potential needs of the community. He is now a visiting professor at Shanghai University. He was Cao Kuanbiao Chair professor at Zhejiang University from 2003 to 2006, and a professor and professor emeritus of the University of California at Berkeley in 1972 and 1994, respectively.