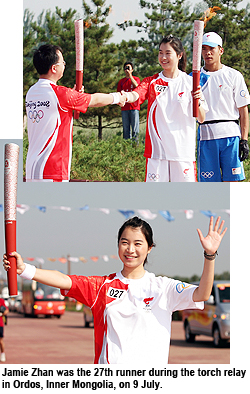 Four years ago I was selected as the torch relay bearer for the Athens Olympics, the first time the Olympic torch had come to China. Everyone was so proud that this day had finally arrived but I was more looking forward to seeing the Olympic Games in our own country.

Our successful bid to host this most conspicuous of international events symbolises China’s great development over the past half-century. As a mainland student from Beijing, I had always dreamt of contributing to my hometown Olympics. So when I first learned that Hong Kong would host the equestrian events for the 2008 Olympics, I was determined to have some kind of involvement.

When I discovered that one of the three global Olympic torch relay sponsors was recruiting torch-bearers online and worldwide in October 2007, I signed up without hesitation. There were criteria to satisfy and I needed to submit a resume and story about the Olympics and myself. All the information was then published online with people invited to vote for the best entrants. The sponsor’s board then compiled a shortlist and the Beijing Organising Committee for the Games of the XXIX Olympiad had the final approval.

I was informed a month later that I had been selected. I felt enormous pride and a sense of responsibility, as well as great excitement. This role now means I am an ambassador of Beijing and China when carrying the torch in full view of the world.

I came to Hong Kong from Beijing and have been to other places in the world, it has been a pleasure to see how much China has changed and moved forward, and how anxious people overseas are to learn from the East. The 2008 Beijing Olympic Games is just around the corner. As a Beijinger and CityU student, I enjoy the fact I come from China, spreading a welcoming, friendly message from Chinese people to the world and promoting communication between East and West.

It was a shame I could not come back to CityU right after the torch relay in Ordos, Inner Mongolia, because I was doing an internship at the Genome Institute of Singapore. Also, I am leaving in three weeks from Singapore for Salamanca, Spain, to complete a one-month language course. But I would love to share this unusual experience in any other way with my fellow students at CityU.

Finally, I would love to send my best regards to my hometown on behalf of all mainland students in Hong Kong and Chinese students abroad, to wish Beijing an unprecedented successful Olympic Games this summer.