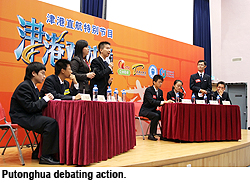 Students from City University of Hong Kong (CityU) and Tianjin University engaged in a friendly Putonghua debating competition entitled "Does economic globalisation result in cultural globalisation?" at CityU on 17 July. As part of the exchange activities between students of the two universities, the contest enabled them to examine and compare the interaction of Eastern and Western cultural influences in Hong Kong and Tianjin, and improve mutual understanding of the respective cities. 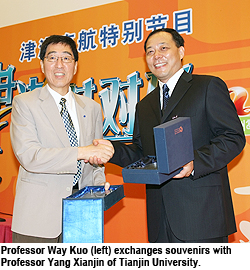 Adopting their opposing arguments, the CityU team had to argue the view that the economic and communications aspects of globalisation would gradually lead to cultural homogeneity. The Tianjin University team argued that many other factors would dilute the influence of globalisation and lead to the retention of diverse cultural environments. 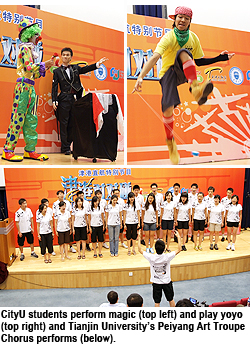 Professor Kuo said he was pleased to witness the interaction between students of both universities and commended the outstanding performance of both teams for their efforts in the competition. "The quick wit and debating skills displayed by both teams exhibited their understanding of Chinese and Western culture," said Professor Kuo.

Professor Yang said economic globalisation would bring about a diversification of culture. "There may be various challenges during the globalisation process but I would hope we could retain our unique Chinese cultural characteristics," said Professor Yang.

Li Song, member of CityU's Putonghua Debating Team and Year 1 student at the Department of Biology and Chemistry, said his team had worked very hard and spent much time preparing for the contest. He hoped there would be more exchange opportunities with Tianjin University. His counterpart from Tianjin University, Tian Zongxu, said it was a high standard and competitive debate. 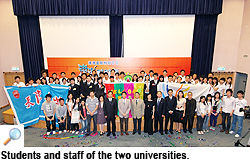 Apart from the debating competition, students from both universities had also arranged an entertaining programme. Tianjin University's Peiyang Art Troupe Chorus performed a popular Inner Mongolian song, while CityU's Yiu Siu-ho, Year 3 student of the School of Creative Media, and Wong Ting-pong and Yuen Kin-wai, members of the Magic Society, played yoyo and performed magic tricks. At the end of the show, students of both universities sang together the song "Tomorrow Will be Better" to express their wish for closer cooperation and more exchange events.

Dr Ruth Yee, who arranged the exchange activities, said, "It was a novel and challenging experience to incorporate a debating competition into the exchange programme. I would like to express my gratitude for the support of both universities, as well as Tianjin Television and Asia Television Limited for their assistance in organising this event."

Besides attending the debating competition, 59 members of the Peiyang Art Troupe Chorus also visited CityU's School of Creative Media, Run Run Shaw Library and Sports Complex. On 18 July, the Chorus performed for the conference on The Internationalisation of Chinese Universities.