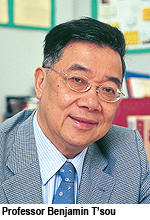 A Course in Sociolinguistics, co-authored by Professor Benjamin T'sou Ka-yin, Director of the Language Information Sciences Research Centre of City University of Hong Kong (CityU), has been selected by the Ministry of Education as a national textbook for use in mainland universities.

To enhance the quality of higher education, the Ministry of Education in 2006 compiled a list of "Standard Teaching Materials for General Higher Education for the 11th Five-Year Plan", listing textbooks meeting the national standards for use in mainland universities. Professor T'sou's book was this year included among those on a supplementary list of publications added to the 2006 list.

Co-authored by Professor T'sou and Professor You Rujie from the Department of Chinese Language and Literature at Fudan University, A Course in Sociolinguistics is one of the very few Chinese textbooks examining linguistics and socio-cultural changes from a Chinese perspective. It is also the first sociolinguistics textbook written by a Hong Kong scholar selected in the list of national textbooks, reflecting the state's recognition of research and publications by CityU's academics. 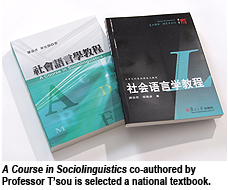 Professor T'sou said the ministry's selection was testimony to sociolinguistics being regarded as an important subject by the education sector. "The inclusion of the book shows that the state has recognised the significance of this subject, and started to adopt research focusing on Chinese communities as textbooks," he said.

The book has been published in traditional and simplified Chinese editions and a Korean edition will come out soon. To cope with the trend of globalisation and China's rapid development, Professor T'sou said they planned to update the contents of the book by including research on the changes undergone in dialects and language used by minority ethnic groups in China, as well as the evolution of languages and the development of vocabulary and grammar.

In addition, Professor T'sou plans to study the way Chinese is used in different Chinese communities. They will base their studies upon an analysis of media texts collected from various Chinese communities by CityU's Language Information Sciences Research Centre since 1995.