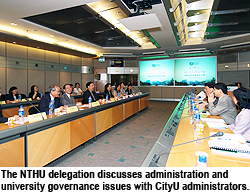 Professor Way Kuo, President of CityU, and other administrators welcomed the delegation and exchanged views on matters of administration and university governance. The visit further underlines CityU’s commitment to building close relationships with mainland and international higher education institutions. 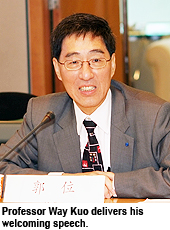 Professor Kuo welcomed the 20-member delegation, saying, “The depth of educational resources in Taiwan is perhaps not as great as in Hong Kong. Despite this situation, NTHU is on par with other prominent world-class universities." Ahead of their meeting, Professor Kuo had said there were undoubtedly many things each university could learn from the other.

Professor Kuo was born in Taiwan and has a strong relationship with NTHU, where in 1972 he gained his BS degree in nuclear engineering and later went on to hold an honorary professorship.

Professor Yip said he was delighted to visit CityU. “CityU has a well-developed administrative system from which we hope we can learn much. We will also discuss some of the challenges and difficulties of operating a higher institution in Taiwan,” he said. Professor Yip said he hoped to engage in more collaborative efforts with CityU, on an academic and student exchange level, in the future. 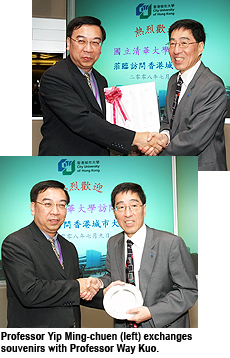 The delegation gained further familiarity with CityU via a campus tour hosted by the Facilities Management Office, which marked a fitting conclusion to the visit.