City University of Hong Kong (CityU)’s Chinese Civilisation Centre (CCIV) is marking its 10th anniversary with a two-day conference titled “Passing the Flame: Teaching and Learning of Chinese Civilisation” starting 2 July. Academics and educators from mainland China and overseas will share and exchange their valuable experience and opinions. 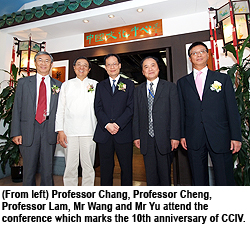 Professor Chang helped establish CCIV 10 years ago. “CCIV became a reality at that time and has now become a success story,” said Professor Chang at the opening ceremony. He especially thanked Professor Cheng and Dr Ma Ka-fai, Assistant Director of CCIV, in helping to forge the international reputation of the centre. 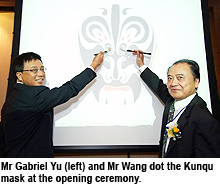 Mr Wang thanked CCIV for its rigorous promotion of Kunqu, one of the oldest extant forms of Chinese opera. “CCIV introduces Kunqu to a university setting by holding performances every year and recording key elements of the artform so our precious Chinese cultural heritage can be preserved and sustained,” he said.

The two-day conference includes sessions on such topics as Chinese philosophy, literature and art, history, geography, archaeology and the development of science. Professor Cheng said the different perspectives of the experts in attendance would offer insight into the new direction of teaching Chinese civilisation. 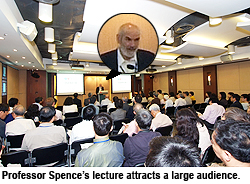 Professor Jonathan Spence, a leading eminent scholar of Chinese history, Sterling Professor, Department of History, Yale University, was the keynote speaker and delivered a lecture titled “The Teaching of Chinese Culture in the West: Early Beginnings and Glances at the Future”. Recognised as one of the foremost scholars of Chinese civilisation from the 16th century to the present, Professor Spence is dedicated to incorporating world history and Western civilisation into the study of Chinese history. He has written extensively on the role of history in shaping modern China.

The launch ceremony of The Kunqu Educational Project forms another important part of the celebration programme of CCIV. The project is dedicated to studying, promoting and reinforcing Kunqu.

CCIV was set up in 1998 to help students grasp the essentials of Chinese civilisation through the study of its various facets, namely literature, art, philosophy, religion, architecture, science and technology, so as to appreciate China’s long and rich cultural heritage. Students are required to take a total of six credits in the subject during their studies at CityU, which can be done in any two of the three modules offered by CCIV.