City University of Hong Kong (CityU) Gallery launched the David Chan Contemporary Calligraphy Exhibition at an opening ceremony on 30 May. Thirty masterpieces by Mr David Chan Tsze-wei will be showcased at the gallery, under the theme “From ‘A Hundred Tastes’ to ‘Forgiveness’”. 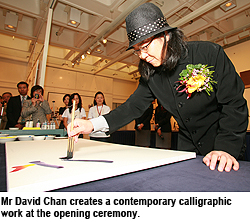 There was a novel demonstration of contemporary calligraphy by Mr Chan at the ceremony. The two pieces of calligraphy were then donated to Against Child Abuse for them to raise fund in an auction.

Mr Chan is a world renowned artist. He grew up in Hong Kong and had learnt calligraphy at a very young age. In 1987, when researching the movie The Stage of a Hundred Tastes, he discovered that the sweet and bitter experiences of life had parallels with the taste of food. Believing he could better illustrate this relationship, he started to work on his creative calligraphy methods. 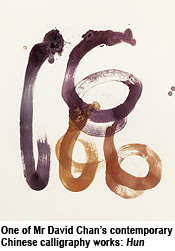 CityU hopes to provide an opportunity for the public to admire the excellent works of this internationally known artist.

The theme of the exhibition represents Mr Chan’s inspiration and his appreciation of art. He created a number of taste-related art pieces because he believes the actual taste of food is similar to the taste of life. Mr Chan always wants to experience Taoism in art, combining the spiritual and physical to reach the utopia of forgiveness.

Mr Chan held his first personal exhibition in 1974. Apart from Hong Kong, he also exhibited in Paris and Toronto. In 1995, the world premiere of “The Stage of a Hundred Tastes” art exhibition took off in Toronto. The art exhibition was later held in Beijing and Hong Kong. 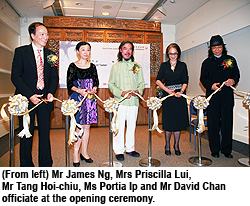 The exhibition will be held from 30 May to 27 June. CityU Gallery has invited Mr Tang Hoi-chiu, Chief Curator of Hong Kong Art Museum, Mrs Priscilla Lui, Director of Against Child Abuse, and Mr James Ng Kam-ming, Chairman of CityU Gallery Management Committee and Executive Director of CityU Extension, to be the officiating guests.