The Tin Ka Ping Education Fund launch ceremony was held at City University of Hong Kong (CityU) on 25 March to acknowledge the generosity of Dr Tin Ka Ping, Chairman of the K P Tin Foundation. City U can benefit a total amount of $6 million. The fund will be used to promote and enhance academic exchange to bolster teaching and research.

Dr Tin is a renowned industrialist and philanthropist and the founder of K P Tin Foundation. He said at the ceremony, “Within a relatively short history of a little over 20 years, CityU has exemplified its strength by maintaining a favourabl 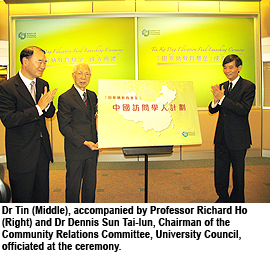 e position among overseas universities. This not only honours CityU but also enhances the reputation and standing of Hong Kong and the mainland. This fund will, by subsidising mainland scholars visiting CityU, further enhance that positive image.”

Professor Richard Ho Yan-ki, Acting President, thanked Dr. Tin for his generosity, “Dr Tin’s donation can help CityU bolster its teaching and research capabilities,” he said. “According to The Times Higher Education Supplement, the ranking of CityU in 2007 jumped five places to 149th,from 154th in 2006. Thanks in part to Dr Tin’s many donations to CityU, the University has witnessed rapid development and registered remarkable achievements,” Professor Ho added, before presenting one of his own artworks to Dr Tin. 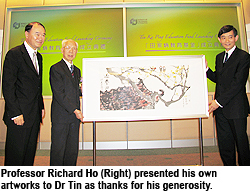 The Tin Ka Ping Education Fund will assist with the “Mainland Scholars Exchange Programme”, in which about 10 visiting scholars will visit CityU each year. The University will use the money to subsidise interaction between outstanding scholars from the mainland and CityU, including teaching activities, scientific research, interviews and seminars. The launch of the fund further highlights the University’s dedication to providing quality education of a world-class standard.

To pay tribute to Dr Tin for his generous donation, a group of student 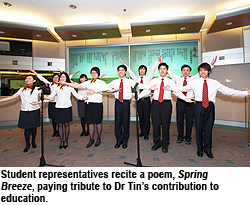 representatives recited a poem, Spring Breeze, during the ceremony. This poem was specifically written by a doctorate student Ms Cui Ying, from the Department of Chinese, Translation and Linguistics, in honour of the donation. In the poem, Dr. Tin is metaphorically depicted as the spring breeze that brings warmth to the earth, thus contributing to the growth of the young.

Dr Tin has generously supported CityU for many years and, as a mark of gratitude, CityU in 2004 named Lecture Theatre One (LT-1) after Dr Tin.