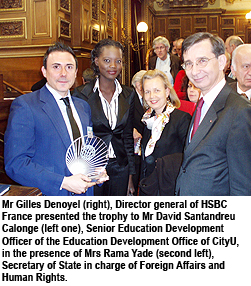 Mr David Santandreu Calonge, Senior Education Development Officer of the Education Development Office of City University of Hong Kong (CityU), has been appointed as a Chevalier dans l’Ordre des Palmes Académiques ("Knight in the Order of Academic Palms") by the French Minister of National Education. He is also one of only six French nationals to be awarded the "Trophées Sénat de la présence française à l'étranger" (International Trophies of the French Abroad), a competition jointly organised by the French Parliament (Senate) and the French Ministry of Foreign Affairs.

David received the prestigious awards in recognition of his outstanding contributions to the spread of French language and culture around the world. "I am truly honoured and pleased to receive these two awards. This is recognition of my efforts during all these years in promoting the culture of France," David said. The award further reflected the world-class standard of the University's staff.

David arrived in Hong Kong in 1993 and joined CityU in 2000. He first worked for Community College of City University and taught French in the Division of Language Studies. He then became a member of the Education Development Office and contributed mainly towards staff development. David is now intending to share his pattern of success with students and staff. He hopes both students and staff may benefit from his experience. 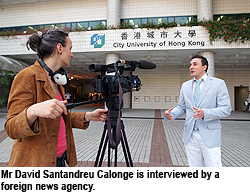 Over the years, David has worked hard on developing different teaching methods to improve students' communication and language skills. He has also been featured in television and radio programmes promoting the language and culture of France.

"I enjoy working at CityU, especially in the Education Development Office. All the staff welcomes new ideas and encourage us to work on different projects. The staff's encouragement inspires my creativity and motivates me to develop new projects," David said.

His dedication to education is further highlighted by his winning CityU's Teaching Excellence Award in 2004 and the Award for Innovative Excellence in Teaching, Learning and Technology in the US in 2005.

Established in 1808, the Palmes Académiques (Academic Palms) was created by Napoleon Bonaparte as a reward for devotion and accomplishment in the realm of teaching. It was raised to the status of an order in 1955 and is awarded worldwide to both French citizens and foreigners. The order rewards teachers and non-teachers who devote their lives to promoting French language, culture, extracurricular and educational activities.

l'étranger" (International Trophies of the French Abroad) has selected six winners from 350 candidates around the world. It aims to distinguish six outstanding French individuals who contributed to the cultural or economic development of France.